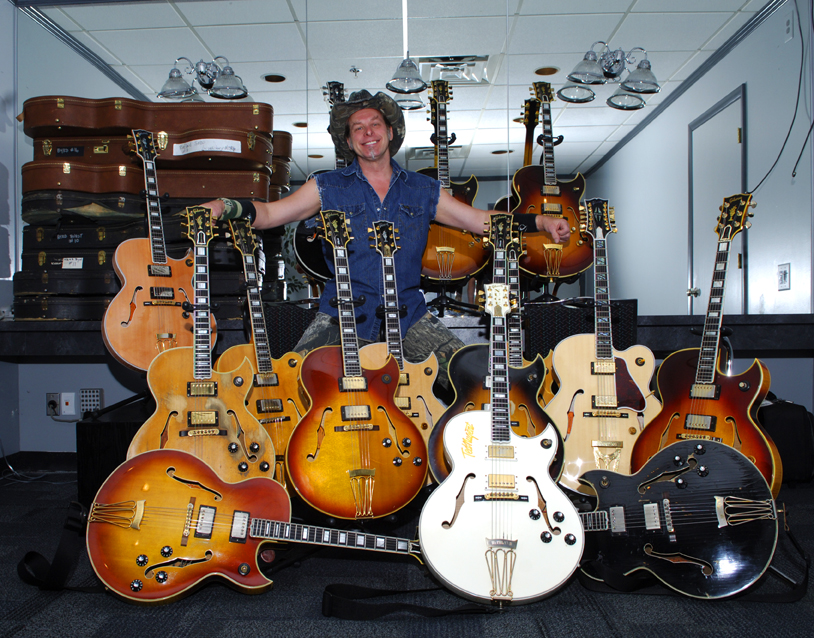 Photo by James and Maryln BrownLike most of the good ol’ U. S. of A., I was first bulldozed by the Motor City Madman, Ted Nugent, when his monster album, Cat Scratch Fever, was first released back in 1977. The first blasting riffs from the Nuge’s Gibson Byrdland guitar pounded my eardrums to such an extent that it parted my then-long hair right down the middle.
From ear to ear, that is.

Fast forwarding to the new millennium, one of the rights of spring I’ve developed in recent years is attending the Dallas International Guitar Festival.  Well, even before I attend, I monitor its website in the months ahead in order to find out who is going to be performing during the three day extravaganza.

The festival is so much fun that, even when I lived in Northwest Arkansas for three and a half years, one of my three closest friends and I drove down to Dallas just for one day of this phenomenal experience.

Well, this year is no different.  Actually, it is just a little bit different.  This year, there lots of guitar heroes making an appearance in some way, shape or form.  Neal Schon, George Lynch and Rick Derringer, to name a few, will grace the stages of the festival.

Oh! In a special jam session, none other than Ted Nugent will be closing out the festival, performing his Great Gonzos in a Free For All, exposing the crowd to Full Bluntal Nugity (cute, huh?).  He does so as he kicks off his Trample the Weak and Hurdle the Dead tour.

Well, I wasn’t just going to sit and wait until Ted tries to find enough hair on my head to see how he’s going to part it on April 18th like he first did 31 years ago.  Nope.  I wanted to chat with this rock and roll legend.  And that I did.
Nugent was kind enough to take the time to answer a few questions for me recently.  It took me awhile to bring Ted out of his shy, reclusive shell (my tongue is firmly planted in my cheek as I write this) but he came around.  He really needs to learn to become more demonstrative (said tongue now firmly planted in the other cheek).

I started off by asking Ted if this was his first appearance at the Dallas International Guitar Festival.

“I have wandered the floor and fondled many American vintage guitar masterpieces once years ago, but I am truly looking forward to attending again, especially with the inescapable master jam session that I smell coming on.”

I’ve got to stop right here and tell you something that will put the comment Nugent just made into sharper focus.  The night before his appearance at the festival will close with a huge All-Star Jam that will feature, among others, Neal Schon (Journey), Ty Tabor (Kings X), Boomerocity friend, Rick Derringer, Dokken’s George Lynch, PRS Guitar founder, Paul Reed Smith, Greg Martin (Kentucky Headhunters) and festival founder and mastermind, Jimmy Wallace.

So, with that said, and the fact that the Nuge is an avid and accomplished hunter, if he says that he smells a master jam session coming on, I’m inclined to believe the boy so I’m not going to miss it!

After shaking myself back to reality, and placing my aforementioned tongue into one of my baggy cheeks, I comment about the “low profile” nature of the Trample the Weak and Hurdle the Dead tour.

So, take note, guys.  These are songs that you’ll want to serenade the love of your life when Valentine’s Day roles around next year.  WAIT A MINUTE!!!  Have you noticed that Cupid carries a bow and arrow just like Ted?  Do you think that they’re one and the same person?  Inquiring minds want to know.

I asked Cupid – I mean, Ted – what fans can expect from his shows this year.

Like the nation’s economy, Nugent’s hometown of Detroit has been hit especially hard.  I wondered how the economy has affected the turnout for your shows.

“For the first year in my life, since around 1960, I didn't tour in 2009.  I dedicated myself to spend important time with family, kids and grandkids, but in 2008, we set attendance and rowdiness records. I expect more of the same in 2010.”

Still on the subject of attendance to his shows, I brought up his well-documented outspokenness in the areas of politics and gun rights and wondered if this has affected fan loyalty.

“One never knows, but to be rocking for sold-out, hardcore music lovers 50 years later says alot. I am both moved and humbled.”

I’m not one to mention age – especially to a man who is deadly efficient with a guitar, gun as well as a bow and arrow.  However, Ted brought it up so I had to ask what has been the biggest change in the music business that has seen from his vantage point.

“I am extremely let down by the lack of genuine music lovers on radio and in the music biz overall. In the 50s, 60s and 70s everyone truly craved the energy and spirit of dedicated musician performances and music.”

Surely there is new talent out there that commands the Nuge’s attention?

“I recently got a soulful earful of a dynamo young lady from Saskatchewan Canada by the name of Val Halla. She and her band kills on her No Place CD.”

I might add that Nugent also provided his master riffs on one tune from the debut album of Meat Loaf’s daughter, Pearl Aday, entitled Little Immaculate White Fox.

With our time gone, I asked Sir Ted what we could expect, project wise, in the next year to 5 years.

“I am SO living The Dream full-time with the best music of my life with Mick Brown and Greg Smith. The productions of our Ted Nugent Spirit of the Wild and Tooth, Fang & Claw TV shows constantly thrills me. And, I must say that the various charity work we do with the military and youth charities truly cleanses the soul. I see no end in sight pursuing my extreme happiness in the glorious American Dream.”

Do you want to bask in Ted’s glow as he enjoys the benefits of the glorious American Dream?  Well, you can!
How?  One way that you can is to join us fellow Gonzos as we bow at the feet of Ted Almighty during his special jam session April 18th at the Dallas International Guitar Festival.  That is a treat that you’ll definitely not want to miss.

Second, you can keep up with other Motor City Madness by going to www.tednugent.com.  You can sign up for Sir Ted’s “Nuge Letter” or even sign up for a premium subscription that will give you access to all sorts of golden Nugents – I mean, nuggets of Nugent news.

Ever wonder what it would be like to go huntin’ and fishin’ with Uncle Ted?  Well, you can sign up for such a memorable outdoor excursion but visiting the same website and get all the details.  Also, while you’re there, you can shop at the TedNugent.com store where you can purchase CD replacements of your old vinyl Nugent albums and other goodies.

I’m just a little surprised that there’s not a Ted Nugent Signature line of loin cloths. 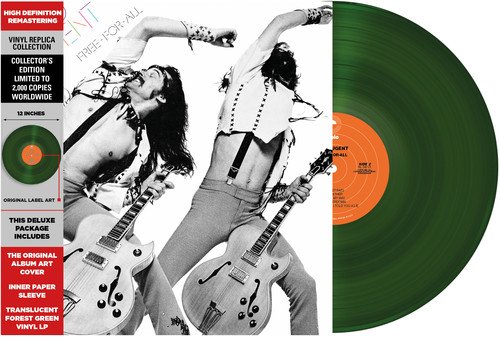