The Decade of Queen V 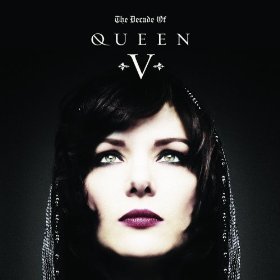 The rock world is bowing down to Queen V with the release of The Decade Of Queen V.

Filled with one blistering hard rocker after another, featuring the tough yet soulful, passionate and empowered vocals of Queen V, backed by an army of guitar slingers (including herself), The Decade of Queen V encompasses her recorded output from 2005 to 2013.

“Calling myself Queen V was a way to challenge myself to really raise the game and try to hold my own with the people who I respect so much: bands like Queen, Joan Jett & The Blackhearts, The Pretenders, Led Zeppelin, and David Bowie. And, of course, being a female rocker, there are inherent challenges as rock is a bit of a boy’s club…but I definitely like to hang out and hold my own with the fellas,” she says.
The album opens with “Revolution Baby” (2009) where Queen V snarls “if you think you own me, go to hell,” complete with a Led Zeppelin-styled blues-harp by Jon Paris, and ends with “Wasted” (2009), an anthem-for-the-ages co-written by Motorhead’s Lemmy who shares vocal duties with V.

Other highlights on the album include the brand new “Cry Your Eyes Out,” the gutsy “My Machine (2009), which features a burning lead guitar solo by Tom Morello (Rage Against the Machine), and the deeply moving “Right Or Wrong” (2005). The 11 tracks on The Decade Of Queen V show that V is not only a fierce Rock ‘N’ Roll siren, but also a nuanced and varied songwriter, able to traverse a diverse range of emotions.

This collection of songs spanning Queen V’s career are solid, strong, and powerful. “I’ve always believed that it’s about songwriting,” she says. “You can color and flavor music any way you want but it has to start with good songs.”

Kenny Wayne Shepherd Talks Touring, Trouble Is, and The Blues
Beth Hart Talks About Her 2018 Tour