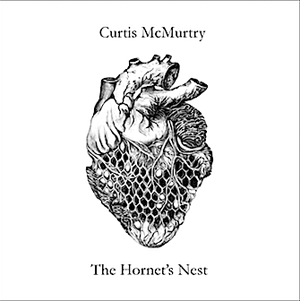 From the first song on The Hornet’ s Nest , it becomes obvious that Austin singer-songwriter Curtis McMurtry is mining a creative vein no one else has tapped. Using a chamber ensemble of banjo, cello, upright bass and muted trumpet, he’s crafted an album full of distinctive melodies and lyrics depicting richly drawn, sometimes delightfully malevolent characters. As he threads their lives through these songs, McMurtry subtly connects them together, like a play staged in 13 elegant vignettes. But on this album, releasing Feb. 24, 2017, McMurtry doesn’t simply observe human emotions and behavior; he plumbs motivations as well.

The album’s theatrical feel is enhanced by the intricate vocal ballet McMurtry shares with his duet partner and cellist, Diana Burgess, of Austin orchestral-pop band Mother Falcon. One can easily visualize them dancing a tango — in a boxing ring — as they vocally spar on “Wrong Inflection.” Spurred on by Nathan Calzada’s snarling trumpet, McMurtry sings in his bell-like tenor, I stay on my guard/‘cause every time we fight you push me too far/stop insisting that I take things too hard/you know I bruise just like a peach. With palpable venom, Burgess fires back, Love this won’ t do/don ’t pretend to know the pain I’ve been through/when everything you have was handed to you/you never even had to reach.

McMurtry likens his songs to snapshots, glimpses that don’t reveal the full story. Listeners become eavesdroppers on his protagonists’ lives; the aforementioned couple might be overheard arguing in a parking lot or trading barbs in an elevator. They’re oblivious to — or don’t care about — how their actions affect others.

Whether that description also fits the singers of “Together for Now” is debatable. But hiding behind the gentleness of this lullaby are these lyrics : We let the sunset unravel around us/you hold me closer than I should allow/Just for a moment I want you forever/but we’re just together for now.

Containing just two verses, the song is an exercise in brevity. But its verbal economy envelops a larger issue: life’s impermanence and how hard it can be to exit situations even when we know we must.

McMurtry takes a similarly concise approach to address the hypocrisy of piety without compassion in “Coward,” and the aggressive impatience of desire in “Can’t Be Better.”

In “Tracker,” McMurtry conjures the ghosts of Brecht and Weill while examining obsession. With a deliberately slow tempo, bowed strings, bass clarinet and plucked banjo, he imparts an unnerving sense of foreboding as this stalker pursues its mark.

That tracker is one of several vindictive narrators we meet during the course of The Hornet’s Nest. According to McMurtry, some are villains who believe they’re victims; others are quite aware of their cruelty. “ A few of my characters are openly heartless and Machiavellian,” he admits. “Sometimes it’s fun to be a monster onstage.”

Though the album is shrouded in darkness, several of these song arrangements exude an air of playfulness. “ Loves Me More,” for example, practically demands a Vaudeville stage. You can almost hear the crackles of a shellac 78 spinning on a hand-cranked Victrola as McMurtry, Burgess and Calzada croon, barbershop-style, Brother, don’t you get so sore/I never meant to start a war/It’s not my fault she loves me more than you.

Despite its non-conformist nature, The Hornet’ s Nest is not some exercise in esoterica. But don’t expect three-chords-and-an-attitude brashness, either. McMurtry’s album simply stands as a gorgeously realized, confident follow-up to his 2014 solo debut, Respectable Enemy, which earned him an appearance on the internationally syndicated radio show Mountain Stage, praise on Rolling Stone’s website and was hailed by the Austin Chronicle as “signaling a bright future for one of Texas’ greatest cultural dynasties.”

“A lot of the music I listen to is from 1950 and earlier,” he says, adding, “I actually missed a lot of rock in my musical education.”

Apparently, that hasn’t hurt his development a bit. McMurtry, 26, wrote his first song—a blues number about Godzilla and King Kong — at 4. After earning a degree in musical composition and ethnomusicology from Sarah Lawrence College in New York, he spent a year in Nashville, receiving lessons in songcraft from Clark and attempting to co-write pop-country tunes. But his Americana grounding and classical/jazz inclinations won out, luring him back to Austin to pursue his own style, free of genre expectations.

Which leads us to The Hornet’ s Nest — and unequivocal proof that “bright future” is exactly right.

Peter Noone
5407 views
Posted May, 2010 Okay. I’m REALLY going to embarrass myself by telling this story. When ...