Canadian born guitarist/singer/songwriter, Jeff Healey, was one of the most prolific, monster guitarists of his generation.  Rendered blind at the very tender age of eight months old, he succumbed to his battle with cancer at the far too young age of 41 years.

In support of Healey’s landmark album, Feel This, The Jeff Healey Band undertook a world-wide tour. One stop during that tour was at The Peer Blues Festival in Peer, Belgium, in July, 1993.

Dubbed by Healey’s drummer, Tom Stephen, as being one of the greatest performances by the Jeff Healey Band, the tape (both video and audio) of the memorable show was found and restored.  The result is this two disc DVD/CD set of the show that is sure to please old and new fans alike.  According to Stephen, may be the only concert caught on tape that shows Healey performing with a guitar rig that allowed him to stand up while he played and sang. Another rare feature on this film is the addition of keyboardist, the late Washington Savage and vocalists Mischke Butler and Toucu, effectively doubling the size of the Jeff Healey Band.

This package contains a lucky 13 of Healey’s musical gems.  As far as Boomerocity is concerned, you could flip a coin as to which version of Angel Eyes is the best – John Hiatt’s or Jeff Healey’s.  We love ‘em both.  However, in this concert Healey offers up a version of the tune on acoustic guitar that nudges him to the top of our list of favorite version of the song.

People totally unfamiliar with Jeff Healey will first be taken by his incredibly unique, never mimicked method of playing the guitar.  The show blasts right out of the chute with hard driving Baby’s Lookin’ Hot that has the capacity crowd immediately on their feet and is followed by the equally driven The House That Love Built.

Boomerocity favorites from this package are the incredible blues tune, Evil And Here To Stay; the beautiful Lost In Your Eyes; the classic Angel Eyes; and, finally, Healey’s live treatment of The Doors’ Roadhouse Blues is especially memorable.

Connoisseurs of great guitar work - and not just Jeff Healey fans - will love The Jeff Healey Band Live In Belgium. Both will watch and re-watch multiple times and, when they’re not near a DVD player, it will dominate the listening time on their MP3 players.

The Jeff Healey Band Live In Belgium will be available April 3, 2012. 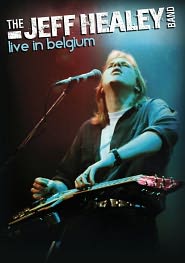