Ticket Masters: The Rise of the Concert Industry and How The Public Got Scalped 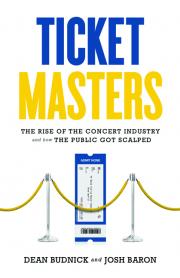 Ticket Masters: The Rise of the Concert Industry and How The Public Got Scalped
Authors: Dean Budnick and Josh Baron
Publisher: ECW Press
Reviewed: June, 2011

How much did you pay for your first concert ticket? For me, it was a whopping $8.50 for a pretty decent seat to see Elvis Presley on Easter Sunday, 1973. For a twelve year old kid in those days, that seemed like an exorbitant amount of money.

Fast forward to today and, if you’ve paid the prices that are being commanded to see top acts today of any genre, not only are the face value of the tickets reaching the stratosphere, there are fees, taxes and the who know what else that jacks up the final price.

Case in point: I looked up how much tickets were going for at the massive, new Cowboy Stadium here in Dallas for the upcoming Taylor Swift concert. At the time of this writing, I could still get a seat on the main floor for, in round numbers, $111. For one ticket. Just one. Seriously.

Oh, but I’ve got to park when I get to the joint. How much is that going to set me back? A whopping $35! Then, of course, there’s the high cost of refreshments while you’re waiting for the show to begin and the t-shirts you’ll want to take home to show that you were cool enough to make the show.

After the show, when you get home and the ringing in your ears has subsided and you regain your senses, you realize that you’ve shelled out a pant load of moolah for a couple of hours of escapism.

What happened since those innocent days in 1973? Why are tickets so dang high and why has it gotten so out of hand? Who’s to blame? Is the artists, the promoter or the venues?

In order to find out more than you’ve ever cared to know about the concert business – then and now – you’ll want to pick up the excellent book by Dean Budnick and Josh Baron entitled, Ticket Masters: The Rise of the Concert Industry and How The Public Got Scalped.

Budnick and Baron did a tremendous job in chronicling the history of the U.S. and Canadian concert business and how the business models have changed. From the days when high school and college drop outs decided to bring their favorites acts to perform in local auditoriums and theaters, to the late legendary promoter, Bill Graham, to the gargantuan corporate behemoths that have pretty much monopolized the concert industry, Ticket Masters documents all of it.

I won’t spill the beans here but I do think the authors have pointed to more than sufficient evidence that market forces mold and shape the “product” that people are willing to pay top dollar for. Those market forces are never stationary but are constantly evolving. The authors call that very point out by stating, “One point nearly everyone in the industry agrees on is that over the last decade, the most desirable seats have been chronically undervalued while the worst seats have been overvalued.”

I know what most people think. They think that the artists are making all the money and, according to Budnick and Baron, that is close to being true. With the majority of the ticket price going to the artists, the venues (which are increasingly owned or otherwise controlled by the giant ticket/concert promoter conglomerates such as Live Nation, AEG, and the like) are pretty much left to making their money from convenience fees, parking and concessions.

As a free-market, laissez faire kind of economic thinker, while I don’t necessarily like what I see in the way of ticket prices, my feelings are that “it is what it is”. The market will seek out its own equilibrium to a point where all parties are relatively happy. In the mean time, I believe that the industry would do well to heed the advice that the late Bill Graham gave to one of his employees, Sherry Wasserman, that is shared in Ticket Masters: “Lower the guarantees so that we can lower the ticket prices so that we still can afford to rock & roll. Cheers.”

Ticket Masters is an excellent book for music historians and business geeks alike. Once I started reading it, it was very hard for me to put down. While you’re ordering your copy, pick up one for that music nut or business geek friend of yours. They’ll love you for it.

Angie Bowie Talks About Re-Recording "Backstage Passes" and Other Projects
651 views
Posted July 2021 If you followed Boomerocity for very long at all, you already know that I had the ...