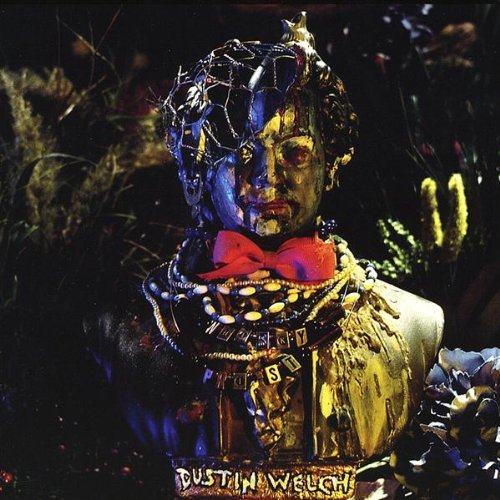 Building on the thrilling strengths of his fearsomely original 2009 debut, Whisky Priest (which LoneStarMusic magazine deemed “one of the most compelling albums to come out of Texas in the past year”), Austin-based singer-songwriter and multi-instrumentalist Dustin Welch offers up his second album, Tijuana Bible..

Like Whisky Priest before it, Tijuana Bible finds the Nashville-born Welch playing the part of a wickedly mysterious carnival barker, bouncing strains of Americana, rock, and folk music off of each other like a hall of funhouse mirrors. His lyrics are similarly multifaceted, reflecting literary influences ranging from American gothic to gritty pulp fiction and themes both sacred and profane. Welch calls Whisky Priest and Tijuana Bible (named after the hand-drawn pornographic pamphlets that were passed around in Depression-era work camps) the first two parts of a projected trilogy. Although the songs are neither overtly religious nor linked to each other as part of a conceptual story, many of them do share a sense of desperation-hardened fortitude — along with hints of mono-mythic mysticism. Welch, a voracious reader who home-schooled his way out of high school and now cites authors like Graham Greene, John Steinbeck, William Faulkner and Cormac McCarthy, has read his share of Joseph Campbell, too.

“I’ve thought a lot about [Campbell’s writings on] myth and storytelling, because it’s so much a part of our fabric, and there’s a lot of that kind of mysticism in it,” Welch says. “I think a lot of these songs have a kind of glimmer of hope to them. They’re about these folks who are going through really hard times, but there’s that little bit of hope that keeps them going. Which, again, is a lot like the heroes that Joseph Campbell talked about. That’s the kind of state they’re in; I just drag these characters through all hell, but they’re holding on against all odds for this once chance of redemption.”

As for the music, well, Welch will swear on a bible — Tijuana, King James, whatever you’ve got on hand — that he dreamt it all up. And not just a song, à la Keith Richards and “Satisfaction,” but a whole sound. It came to him as a vision — so loud and clear he could see it like a moving picture in his mind, the notes and colors and shapes coming into sharp relief just as he was drifting off to sleep. The melody was strange and complex, a beautiful cacophony of disparate styles clashing together all at once: Celtic and Appalachian folk music set to driving rock and dexterous jazz rhythms, with big harmonies sung in a “gritty and raw,” “archaic” sounding language. “It was profound,” he recalls. “It felt like horses running wild. And I’d never heard anything like it.”

That was half his life ago, but that sound still resonates within him. And through him, because that music Welch first heard in a dream some 15 years ago is now very much his own sound, still wild and untamed but corralled into the digital grooves of Tijuana Bible, which he recorded in Austin at the home studio of producer/drummer Eldridge Goins. In addition to writing or co-writing all 11 songs, Welch plays banjo and acoustic and gut-string guitar on the album; other players include electric guitarist Jeremy Nail, violinist Trisha Keefer, pianist Scotty Bucklin, and bassist Steve Bernal, among others.

“We ended up doing some overdubs, but mostly we recorded everything live in the same room in three different sessions in three days,” says Welch, who made himself right at home on Austin’s celebrated live music scene upon moving to town just a few years ago. “This group of guys, they’re all really sophisticated musicians, and it’s funny because a lot of real sophisticated musicians like that, really all they want to do deep down is rock.”

Listen to Welch snarl, stomp, and tear his way through the songs on Tijuana Bible, or watch him ratchet up the intensity even higher onstage (even when playing solo acoustic!), and you’d naturally assume the guy was born wanting to rock himself. Fact is, he was a bit of a late bloomer, at least to that side of his musical personality. As happens when your father is a renowned songwriter (Kevin Welch) with a Nashville publishing deal and you grow up around some of the most gifted writers and hottest pickers in Music City, U.S.A., Welch was born and raised surrounded by music and displayed a natural affinity for any instrument he could get his hands on practically from the time he was in diapers. But as a teenager, most of the music other kids his age were into just didn’t speak to him. He avoided MTV and VH1. “I remember the first time I heard Nirvana’s Nevermind, I thought was the worst shit I’d ever heard,” he admits with a laugh. (Jimi Hendrix didn’t impress him much at the time, either — though he’s quick to note that he’s since learned to appreciate both.)

In lieu of rock, Welch’s earliest musical influences just naturally skewed more towards jazz, classical, blues and country. In high school, he flirted with jammy hippie fare in a band called the Groundlings (featuring singer Cary Ann Hearst, now of the Americana duo Shovels and Rope), and he later spent his early 20s playing rootsy, old-timey country and blues in Nashville’s the Swindlers with fellow “Music Row brats” Justin Townes Earle, Travis Nicholson and Cory Younts (Old Crow Medicine Show, Jack White). But then fate came knocking via an offer to join a West Coast Celtic punk band called the Scotch Greens in need of a touring utility player. It wasn’t long before Welch was reveling in the rush of playing full-throttle punk rock (on banjo and Resonator slide guitar, no less) in front of moshing Warped Tour fans.

“I think it made a big impression on me the way that people reacted to that stuff, and just the energy of it,” he says. “I’d see 500 people in a crowd of 1,500 all singing along, pumping their fists in the air. I think music can really be something that the listener can participate in. It’s the same way with some speakers and preachers; their message might not be anything real profound, but the way they deliver it, that intensity just builds and builds until everybody is empowered and feels like making a difference in the world.

All that energy and intensity certainly made a difference in Welch’s own music, once he finished his time with the Scotch Greens and moved to Austin to begin his solo career in earnest. “It came through in both my writing and my delivery,” he says. “It gave me the confidence to just make things slightly more . . . exaggerated. Exaggerated rather than glorified, though, which is what you hear in a lot of more commercial music. When it’s over-glorified, I think it robs it of its soul. But I’ve really been getting pretty idealistic about how much music can change the world, and I think the more heartfelt communication we have, the better place the world can be.”

That’s not a belief he holds on blind faith, either; he’s witnessed it action. Welch has spent the better part of the past year and a half volunteering for the Texas chapter of the Soldier Songs & Voices program, a national organization he helped found that provides free music and songwriting lessons — and even guitars — to Armed Forces veterans. Twice a week, he meets with men and women who are finding through song a means to not only share their stories, but also cope with and make sense of their own journeys to hell and back again. “These guys we’re working with, they’re really getting their lives back, and I see it more and more every week,” Welch marvels. “And music can work that way across the board, with anybody, because it really is our common denominator. It’s the universal language, and it resonates with people on this subconscious, emotional way.”

And on Tijuana Bible, Welch uses that language to tell the trials and tribulations of a varied cast of battered and broken but not quite entirely beaten souls, ranging from the Vietnam vet of “Sparrows” to the fragile Hollywood China doll of “Party Girl” to the fire-starting hooker’s son of the album’s chaotic closing title track. There are more sinners than saints here, and some of them are admittedly a lot farther off from redemption than others. As the protagonist in “St. Lucy’s Eyes” warns, “This life I lead, it’s not for the faint of heart.” But even at its darkest, Welch’s music still thunders with the exuberant spirit of horses running wild, indifferent to the line between fever dream and prophesy.

Cosmo Clifford Shares A Glimpse Through The Magic Window
1548 views
Posted April 2020 Photo by Brent Clifford croppedCreedence Clearwater Revival. The mention of the ...