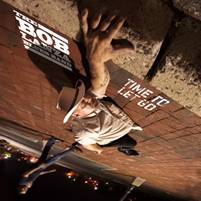 “This album comes at a time when I've had a lot of loss in my life,” confesses Lanza. “My mother and brother both passed away while I was recording this CD. It’s a tribute to them, and a suggestion to all of the families that go through difficult times; you gotta let ‘em go and continue life.

“From the sound engineers to the people at Connor Ray and all who helped on this project - these people are what make the world go round. To see how much help I got while doing this CD was just mind-blowing to me.”
Joining Bob on the album are his regular touring band members, plus The Cranberry Lake Horns and several special guests, including Steve Krase on harmonica.

The circumstances that occurred during the recording of Time to Let Go fueled an extra level of expression of visceral feeling from Lanza, which manifested itself in both his guitar playing and singing. “My guitar is raw, powerful and very emotional on these tracks,” he admits.

Born and raised in the wilds of northern New Jersey, Bob Lanza took advantage of his proximity to New York City to learn from the great Johnny “Clyde” Copeland and Floyd Phillips. Their influences can be heard in the passion embedded in all of Lanza’s music. More recently, Bob Lanza has provided support for Trudy Lynn and James Cotton on their East Coast appearances.

Bob Lanza sums up the music on Time to Let Go with this message: “the blues is alive and it’s coming to get you!!”

Keep Up With Bob Lanza at http://www.boblanzabluesband.com