Too Many Bad Habits (Re-Issue) 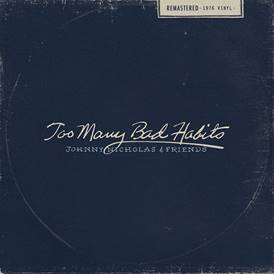 Too Many Bad Habits (Re-Release)

Heralded Austin-based blues/roots musician and songwriter Johnny Nicholas has reissued his long out-of-print 1977 album, Too Many Bad Habits, along with a special bonus disc of previously unreleased performances, via his The People’s Label imprint. The two-disc set has been completely remastered and includes the liner notes from the original Blind Pig LP release in 1977. A new set of liner notes written by acclaimed author/music critic Ed Ward will also accompany the CDs and vinyl. Featured artists on the original sessions included blues legends Big Walter Horton on harmonica and vocals, Johnny Shines on guitar and vocals and Boogie Woogie Red on piano and vocals, as well as Ray Benson and other luminaries of the original Asleep at the Wheel lineup.

“This album was initially released on the fledgling Blind Pig label in 1977 and was cut from their catalogue in 1978 shortly after I joined Asleep at the Wheel and stopped touring under my own name,” remembers Johnny Nicholas. “I requested the original masters back from the label numerous times over the years and finally got possession of all multi track tapes, masters, art work and photos in January of 2016. After we successfully transferred all of the old tapes, I was pleasantly surprised to discover a bunch of stellar performances which had never been released—Walter and Johnny and Red were my friends and mentors and hearing this stuff was such a thrill. I hope people enjoy listening to these historical slices of the real blues, played by the masters, as much as we have enjoyed re-discovering, listening to and remastering them.”

The 14 songs on the original album release, plus the 12 performances on the bonus disc, were recorded in Austin, Texas, as well as two other studios in Michigan. “There were three recording sessions that I recall, although so much of that period of my life was a blur,” says Nicholas. “I was constantly ramblin’ between Chicago, Ann Arbor, Texas and Louisiana during those days, with several stints hitch hiking and hopping freight trains back and forth to the west coast to gig with Commander Cody and Asleep at the Wheel before they moved to Austin. One session took place in Texas after their move to the Lone Star State and the other two were recorded in the Detroit area.

“The Austin sessions were recorded in 1975 by Austin radio and music legend Joe Gracey and included Asleep at the Wheel members Ray Benson, Lucky Oceans, Bill Mabry, Link Davis Jr and Tony Garnier (Bob Dylan’s bass player and bandleader for the last twenty five years). All of these cats, like their idol Bob Wills, dug the blues.

“The Ann Arbor sessions were mostly recorded on four track tapes (small and large reel) as I recall, at Blind Pig co-founder Jerry Delguidice’s house outside Ann Arbor. Most of the unreleased performances were recorded there. The eight track tapes were recorded in Farmington Michigan. We would line up gigs at the Blind Pig club in Ann Arbor, record during the day and perform at night.”

Born in Rhode Island, Johnny went to high school with Duke Robillard. After the band that he and Duke fronted called Black Cat split up, he moved  to Ann Arbor in 1970 and became a major player in that college town’s burgeoning blues and roots scene, which had started with the three-day 1969 Ann Arbor Blues Festival, the first blues festival of its kind in the U.S. Two of the top live music venues in Ann Arbor, the Blind Pig and Mr. Flood’s Party, began hosting more blues performers to meet the demand, keeping the groove going between the annual festivals.

When Nicholas arrived from the east coast for the 1970 Blues Festival, he brought some of the best blues players out of retirement and brought them together night after night in local clubs, free outdoor concerts, and at the Ann Arbor Blues Festivals. While he performed with dozens of well-known artists in those venues, among the most frequent and popular with local blues lovers were the legendary Big Walter Horton, Johnny Shines, and Boogie Woogie Red.  He performed with all of these artists and many more, as well as his own band “The Boogie Brothers,” at the Ann Arbor Blues and Jazz Festivals of 1972 and 1974.