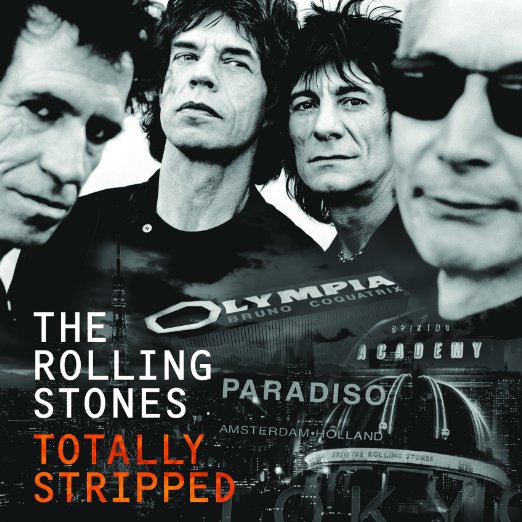 Boomerocity is always excited when The Rolling Stones come out with something new. This holds especially true with their latest rockumentary/concert DVD, Totally Stripped.

One of the most anticipated releases in recent years, this collection features The Rolling Stones going back to the source of many of their favorite tracks, creating new stripped back versions. Selected material from studio sessions and shows presented here formed the Stripped album of 1995.

Totally Stripped is available as a DVD or SD Blu-ray containing the newly-revised documentary of the same name, or on DVD+CD or DVD+LP featuring the documentary and single CD / 2LPs compiled from live shows. Additionally a DVD or SD Blu-ray deluxe edition is available, packaged with a 60 page hard book set containing 5 discs which boasts hours of previously unavailable music (three complete shows made available for the first time ever) from this truly legendary act.

These reimagined versions lose none of their impact and emotional heft, and in fact connect with listeners in a different way. Totally Stripped itself is a brand new version of the documentary of the same name, which tells the stories of the two studio sessions and three live shows (The Paradiso in Amsterdam in May 1995, L’Olympia in Paris and Brixton Academy in London in July 1995) that make up this project. The Deluxe Edition contains a CD of favorites drawn from across the live shows and three DVDs featuring, for the first time, ever each of those shows in full.

Following the ‘Voodoo Lounge’ tour, The Stones released Stripped, an album of reconsidered, pared back renderings of some classic Stones tracks, and also a couple of carefully chosen covers. The album mixed new studio versions of tracks with some live songs. The tracks that made up Stripped were taken from two studio sessions that took place in Tokyo [March 3-5, 1995] and in Lisbon [July 23-26], and a trio of live shows in July 1995 at small concert venues in London, Paris and Amsterdam. Keith Richards commented, “There’s something about playing these small venues, the immediacy of it. Also we can keep God out the band, because on big gigs he sometimes turns up as rain or wind”.

As Mick Jagger said at the time, the aim was to “Take the best element from [MTV] ‘Unplugged’, the intimate thing of it, without actually doing it completely unplugged”. This collection is built on the power of lyric and melody, and the material here feels somehow simpler yet potent, as the songs stand on their individual timeless quality rather than on the production techniques and technical expertise that generally come as part and parcel of being the biggest band in the world.

Totally Stripped is the release that the fans have been waiting years for, a document that reveals the inner workings not only of The Rolling Stones themselves but also indeed some of their most loved tracks. Revealing, intimate and moving, Totally Stripped is unmissable.