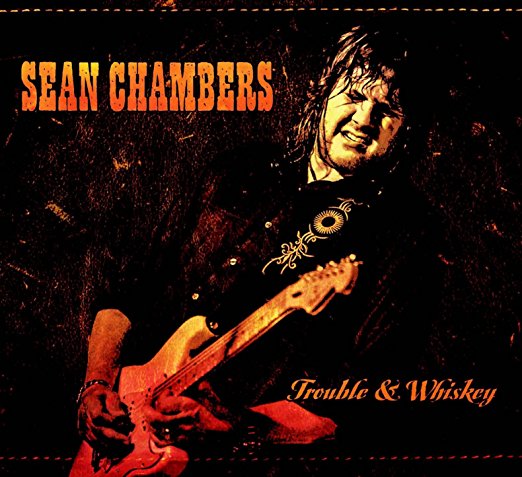 Florida-born Sean Chambers will be releasing his latest CD, Trouble & Whiskey, in a couple of weeks and fans will be glad that the wait is over.

Trouble & Whiskey is the sixth CD by Chambers. From groove to groove, it’s ten tracks (seven originals by Sean) of hard driven rock and blues sure to get you movin’. The three covers on the disc are Rory Gallagher’s Bullfrog Blues, Cut Off My Right Arm by Johnny Copeland, and the Riley B. King/Joe Bihari tune, Be Careful With A Fool. The title cut is well worth the price of the whole CD and earned infinite slaps of the repeat button.

The album is produced by Ben Elliott who has recorded classic artists such as Eric Clapton, Keith Richards, Billy Gibbons, and Leslie West among others. The core band on the album, aside from Sean on lead vocals and lead guitar, includes Michael Hensley on the Hammond B3 & keyboards, Todd Cook on bass, and Kris Schnebelen on drums. Special guests included Jimmy Bennett on guitar on Handyman, John Ginty on the Hammond B3 on Travelin’ North, and Andrei Koribanics on percussion on I Need Your Lovin’ and Sweeter Than A Honey Bee.

Rock and blues fans looking for something that you can’t find just anywhere will want to seriously consider picking up Trouble & Whiskey. I promise that you’ll wear the thing out.

Billy Vera Discusses His Career and Little Richard
18016 views
Posted June, 2015 The name, Billy Vera, may or may not ring a bell with you but you most certainl...

Robert Berry - Version 3.2
Dion Shows Us Around His Stompin' Ground