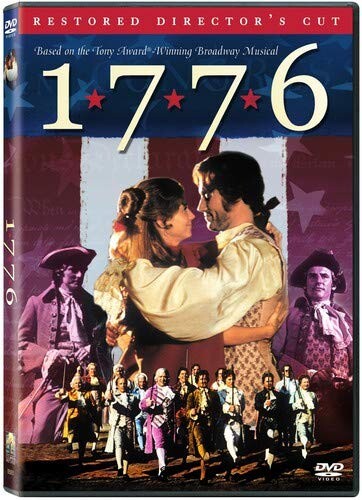 Click Above To Order Your Copy1776 – Momma Look Sharp

Today, I wish to write about something that I feel very passionate about: The sacrifice by our troops now and throughout the marvelous history of these United States. I’d like to lead into the piece with yet another story from my high school days.

In 1976, the country was in the midst of celebrating its bicentennial. I was a junior at Moon Valley High School in Phoenix, Arizona. For some inexplicable reason, the Concert Choir teacher, Mrs. Charlotte Caldwell, allowed me to sing in her choir. I suppose that I served as the poster child for how NOT to sing. I dunno.

To commemorate the bicentennial, Mrs. C had us to begin work on some patriotic pieces. We were to perform them at a multi-choir extravaganza that was to be held at Symphony Hall in downtown Phoenix. One song in particular stands out in my mind to this very day. The song is “Momma, Look Sharp” from the musical, “1776”. With the Vietnam War/Conflict over the year before, the country was under the mistaken impression that war was no longer in America’s future. The choir sang as though it was forever in our past.

We rehearsed the song to perfection, and I never really paid much attention to the lyrics until the night of our performance. Then, for some reason, while singing “Momma”, the words pierced my heart to the point of bringing me to tears.

The song tells the story of a Revolutionary War soldier, dying on the battlefield, crying out for his mother to come to him even though she is many miles away. His mother responds back to him with words of how she’ll bury him. The song speaks to the pain of those dying and those left grieving – all in the fog of war.

While I was trying to maintain a Fonz-like cool, I suppressed the waves of emotion the mental images of the song created within me. Over the 30-something years since that time, I’ve often reflected on that song and the message the song conveys.

While contemplating the weight of what the song is saying, I think of the men and women who have paid the ultimate price for their – and our – country. I think of the families left grieving. The kids left without a parent. Generations left unborn. Memories never made.

I think about the Tomb of the Unknown Soldier and wonder if that soldier cried for his mom as he lay dying in a lonely battlefield. I would swell with pride that, though unknown to us, our country refused to allow him to go unheralded. To this day, presidents still pay homage to the soldier known only to God.

As I’m sure many of you do, I often take what we have in this marvelous country of ours for granted. When election time roles around, I am tempted to not vote for one reason or another. Other times, I am tempted to think that certain liberties might be okay to lose or suspend.

Then the words of “Momma, Look Sharp” begin to haunt me again and I think of the Unknown Soldier and their known grave bound comrades. Did countless brave men and women give their lives only for me to trample on their graves by not revering the awesome liberties we enjoy in this country? Could I look in their families faces and say, “Sorry for your loss but I don’t have time to vote today or to keep the enemies of freedom at bay.”?

I hope that I’m never guilty of such a crime.

So, in honor of our brave soldiers who have spilled precious blood on a hill called “Bunker”, cities called Khe Sanh or Baghdad, or the myriad mountains of Afghanistan and Iraq, I salute you and thank you. You’ve made our country the envy of the world!