The King Is Gone (Revised) 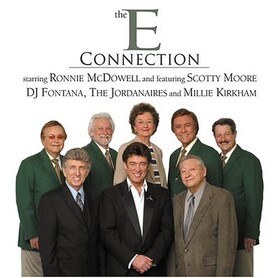 Click Above To Order Your Copy“And the world stood still to hear him sing . . .”
From the song, “The King Is Gone” by Ronnie McDowell

Tomorrow marks the 44th anniversary of the passing of Elvis Presley.

Where were you when you first heard that Elvis had died.

I remember all too well where I was. I was at a church youth camp in the desert outside of Tucson, Arizona. I saw the headlines on a paper that one of the campers was reading.

It was all I could do to keep from crying.

I was born and, at least for the first nine years of my life, raised in the South by parents who were also born and raised in Dixie. What they teach you in Southern Child Rearing classes is that you MUST raise your kids to listen to Elvis and watch his movies. At least that's what I thought as I was being raised in the Sixties.

During those years, we didn't have much in the way of records in the house. But what we did have were quite a few 45 RPMs by Elvis that were my mom’s. I played those records repeatedly.

They included "Wear My Ring Around Your Neck" and "Blue Christmas". I listened to those records winter, spring, summer and fall and I loved them! After my mom died in 2018, my dad, sister, and I were going through the treasure trove of Mom’s life’s belonging and we came upon those records.
The memories came flooding back to me.

Back to being raised on Elvis.

Also, during that time, it was always a very special treat to be able to watch an Elvis movie at the theater or, as a runner up, on T.V. As kids often do, they inject themselves into the characters played by their idols and I was no different. After watching an Elvis movie, I would go outside and play, being whoever Elvis was in the movie, winning the imaginary fist fights and the beautiful women. It was good to be the king.

Thinking back on this, I’m reminded of Elvis’ speech when he was named one of the Ten Outstanding Young Men in the U.S. in 1970 by the U.S. Jaycees. You can watch that speech on the left. You’ll get what I mean.

Fast forward a few years to Spring, 1973. I'm certain that I was the only eighth grade kid in Phoenix that would admit to liking and listening to Elvis. By that time, the Beatles and the Stones were what the kids sitting at the cool kids table were listening to. I was a late bloomer when it came to them, but I never gave up my fandom for Elvis.

Imagine my surprise when I learned that the King was going to be performing at Veteran's Memorial Coliseum at the State Fair Grounds. However, there were two problems that I had to overcome. One, the tickets were a whopping $8.50! That was a lot of money to a twelve-year old kid in 1973 but not an impossible amount to scrape together in a short amount of time. The second problem would require an act of God to overcome because of when the concert was going to take place. The date of the concert? Easter Sunday!

"Big deal," you say? Try telling that to your mom who had you in church every time its doors were open.

I went to Mom and asked if I could see Elvis, not expecting a positive outcome. Again, imagine my surprise when she said that I could if I had the money for the ticket! That was certainly doable, so I was good to go.
I waited in line the day the tickets went on sale, and I managed to secure a seat on the floor towards the back of the room.

The day of the concert soon arrived. I got up that morning and put on my Easter best, hoping that Pastor Berry would keep the sermon short so that I could boogie on down to the coliseum. While he seemed to preach for eternity, I was able to get out of church and down to the arena two hours before the concert was to begin. I didn't want to miss a thing.

After checking out the memorabilia tables, I located my seat and then began to wander around the rest of the venue. I went to the backstage area, hoping to see if Elvis was hanging around but he wasn't. Besides, the policeman guarding the area gave me the distinct impression that he really didn't want me there, so I moved on.

After taking the officer's friendly hint, I moseyed on over to right at the foot of the stage, checking out the instruments - especially Elvis's famous black Gibson guitar that has graced many photos of him in concert. While ogling the gear, I noticed someone walking up to the stage near me. Expecting yet another cop wanting to move me along, I was stunned to see that it was none other than Elvis's famous manager, Colonel Tom Parker.

I fearlessly walked up to him as any thirteen-year-old might do and asked him if he was the Colonel. The rest of that conversation can be read here. It is my handwritten report that I turned in for a school assignment. I proudly tout this as my first celebrity interview.

Well, I enjoyed a great concert by one of the most influential people in history and I was none the happier.
That night at church (because the doors were always open on Sunday nights and, by golly, I had to be there!) some of the more "holier than thou" members sniffed their disapproval of my activities that afternoon. Others excitedly asked me how the show was, not believing my luck at having met the Colonel.

Going to bed that night, I repeatedly reviewed the incredible events of that day, falling asleep while looking at the programs and posters that I bought, knowing that not a soul at school could care any less about my day and the "sniffers" at church thought that I was surely doomed to Hell.

It didn't matter. All I knew was that, as far as I was concerned, for a couple of hours the world stood still to hear Elvis sing and I was there to hear him.

Mike Mushok
5121 views
Posted December, 2011 Staind.  The band is synonymous with tough, take-no-prisonerrs, in your ...

Dion Shows Us Around His Stompin' Ground
B.J. Thomas