Santa Claus And His Old Lady 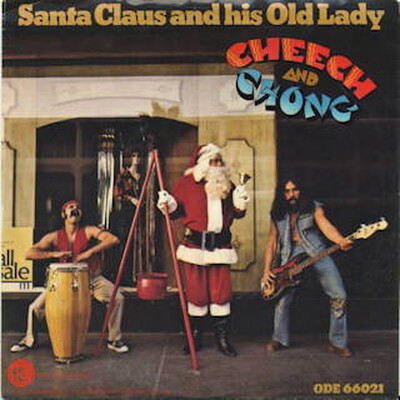 From “Santa Claus and His Old Lady” by Cheech and Chong

When did you quit believing in Santa Claus? Me? I dunno. Probably a lot older than I should have. But, heck! Believing was most of the fun. Besides, I had a sister who is almost seven years younger the I am, and I didn’t want to ruin the fun for her.

There’s something special about the anxiety and anticipation in kids when they’re giddy with excitement about Saint Nick dropping some toys off at their house. I always got a kick out of watching my daughter as she sat on the big guy’s lap, telling him her list of wants and desires. The child-like shyness and wonder always put a smile on my face.

It was not until she was in her late teens or early twenties did, I learned that Mr. Claus always kind of creeped her out. She was also just a tad disturbed that some stranger, Mr. Claus though-he-be, could just drop into our home while we slept and did as he pleased. She felt so . . . violated.

One of the funniest memories I have of kids and Santa Claus was when I was a pre-teen. Our pastor’s granddaughter visited Nick for the first time. Why I was there, I don’t know but I’ve never forgotten this event.

The little girl sat there, cherub-like, while the obligatory picture was taken to commemorate the event. I couldn’t help but notice Santa had an odd look on his face. The picture was snapped, and everybody said, “Oh, how precious”. Everybody, that is, except SC. As the cherub was being retrieved by her parents, there, bold as lightning, was a big wet spot-on Mr. Nicholas’s trousers.

He was not happy despite being left with a warm feeling.

Over the years, I’ve started buying just a little bit fewer gifts and drop-off toys with one of the local toy drives. I am told of some people who know of a family where the breadwinner has lost their job and those more fortunate make it possible for the breadwinner to provide gifts for their family while maintaining some pride and dignity. Others adopt a soldier serving our country overseas and send gifts to them. Still others go with their family on Christmas day and work at one of the kitchens that serve dinner to the needy.

In some way, shape or form, we can be a Santa to someone in need. As Tommy Chong said in “Santa Claus and His Old Lady”, “We could use a dude like that right now!”

We can be that dude. By doing so, we can get that warm feeling all over without the muss and fuss of having to take your clothes to the cleaners.

Brian Ray Talks Etta James, McCartney and Guitars
342 views
Posted January 2022 When I launched Boomerocity, I had a mental bucket list of some of the people I...