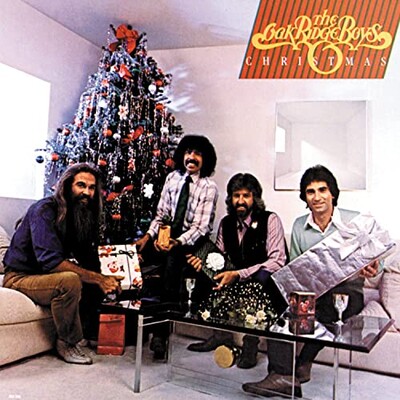 From “Thank God For Kids” Sung By The Oak Ridge Boys

I originally wrote this piece for the first Christmas of Boomerocity’s existence. Dale Hansen’s “Thank God for Kids” has always been a favorite of mine right up until I moved from the Dallas area.

A lot has happened since I first posted this piece twelve years ago. Career disruptions. A divorce. A lot of loss financially, emotionally, and relationally. Residential changes. Career changes. A pandemic. Basically, a lot of disruption.

Yet, despite a lot of turmoil in this rock and roll show called life, I have a heart full of gratitude for a lot of things and a lot of people. No amount of conflict, treachery, tragedy, or underhandedness will ever make me believe that the goodness in the human heart is completely gone. Imperfect? Obviously. But we each have goodness in us. Our Creator made sure of that.

Earlier this year Dale Hansen retired from WFAA in Dallas. When I heard that he was retiring, we exchanged a couple of notes. I wanted to make sure that he knew, once again, that he had a tremendous impact on me, my writing style, and (even though I didn’t always agree with him) how to articulate how I thought. I also wanted to thank him for his “Thank God For Kids” every year.

I’m using a different video than I did in the beginning. I think it goes to the heart of what “Thank God For Kids” has been all about.

Kids. They have a way of changing our view of life once they enter ours. As I’ve written before, when my daughter was born, I saw the world through a completely different lens and felt the awesome, additional responsibility of having a beautiful little girl depending on silly ol’ me.

As with most people, I become especially more aware of, and focused on, kids at Christmas time. After all, who else expresses the fun-filled awe and wonder of the season? Watching kids – all kinds of kids from all races, creeds, cultures, and economic strata – during the Christmas season always brings smiles on, and tears down, my face.

I’m not alone. Here in the Dallas/Ft. Worth area, the top-rated sportscaster (Dale Hansen) on the top-rated local station (ABC affiliate, WFAA) offers up a highly anticipated feature each Sunday before Christmas. The feature is entitled, “Thank God For Kids”, and was inspired by the song of the same name that was a huge hit for The Oak Ridge Boys.

Dale’s retired now but, over the years, he got it. Each year, he reminded us of the specialness and uniqueness of these gifts from God. Every annual presentation was as unique as the children he talked about. More times than not we were left with a “little wet” in our eyes. The stories tell of special kids - kids that are special to Hansen and become special to us. Hansen was been known to express his unfailing love for his own children while making it painfully clear that he feels that he’s been less than an ideal father.

Each year, the monologue ended with a video montage of photos of some of the kids that Dale has highlighted over the years and it’s all set to the Oak’s huge hit. I defy anyone to sit through the whole presentation and not be affected by it.

I was curious about the impact this song has had on others who have heard it so I contacted someone who would know: Duane Allen of The Oak Ridge Boys. He was on his tour bus prior to a show in Kalamazoo, Michigan, and was kind enough to spend a few minutes on the phone with me to chat about this song.

Even a dummy like me knows that the song had to have had a tremendous impact on those who have heard it. I asked Duane what the reaction to Thank God For Kids has been over the years. Although it shouldn’t have, his answer caught me off guard.

“Well, you know, the biggest thing I can mention about that song – we actually have two songs that really touch the hearts and communicate and relate with our special children. We see it every night everywhere we go. I think that it probably started with ‘Elvira’ because the special kids all over America, when they heard that song, there was something about the hook lines of that song that they could catch. They could find a part in the song where they could sing it themselves. ‘Elvira’ opened up that market for us, especially for the special children.

“And then, when we followed about a year later with ‘Thank God For Kids’, I think that we already had those special children, in particular, we had their attention and I think they, in particular, really claimed that song as their own.

“I see it every night. When we start doing that song, I can look out in our audience, we have an appeal to a lot of these children. They always respond. So, I think it has a very, very special connection with the special children and children in America.”

We all have songs that, when we hear them, instantly remind us of a person, place and/or time. I asked Mr. Allen if there was anyone that came to mind each time they sang Thank God For Kids.
“Well, I don’t have any story that I can just pull out of my head right now. I do remember the first time we did it. We were doing a television special for HBO and (long time Oaks member) William Lee Golden had just become a grandfather. When we got to the end of that song, and without any of the rest of us knowing what he was going to do, he sang, “thank god for kids” and then he said, “and grandkids, too!’

“That has kind of stuck as a signature of William Lee ending that song and it came from the reality that he had just become a grandfather. I think, probably, it is as much recognizable with that song as the song itself because it helps to identify him singing that song. And, so many people, when we get to that part of the song, which is right at the end each night, you can see people preparing themselves for that line as he’s getting ready to sing it. You can just see it from the stage.”

This song is obviously a special one that Allen likes to talk about. He continues by adding, “Another unique thing about doing that song is back during Stars For Children Days (an Oak Ridge Boys charity organization for the prevention of child abuse), which we had in the Dallas/Fort Worth area, we started Stars For Children and we had concerts in Reunion Arena (Dallas) and in Fort Worth. We raised enough money in Dallas, Fort Worth, and Houston to build eight homes for abused children. And then we donated that non-profit organization to the people of Fort Worth so that they could continue it and they did.

“While we were doing ‘Stars For Children’, one of the televisions stations locally told us they would like to film a video on Thank God For Kids. They took us to this Sesame Street Park – I don’t know if it’s still open or not but it had all these Sesame Street characters in it and we did a video of Thank God For Kids in that Sesame Street park. We still use that video today when we sing that song. It’s playing on the big screen behind us every night that we sing it. That was done in the Dallas/Fort Worth area.”

Please watch the video I’ve embedded on this page. It will touch a part of your heart that you didn’t know existed.

You’ll cry, laugh or smile but in the end, you’ll thank God for kids.

Randy Bachman Talks About Heavy Blues
5851 views
March, 2015 Whether you were a teen in the late sixties or in the early to mid seventies, chances a...