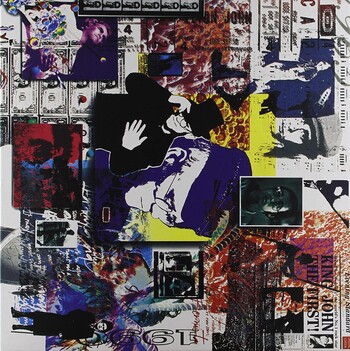 Click Above To Order Your Box Set“It seems to me a crime that we should age. These fragile times should never slip us by. A time you never can or shall erase, As friends together watch their childhood fly . . .”
From Elton John’s “Friends”

During my Sophomore year of high school, there was going to be some sort of pep rally during one of the hours of class. In those days, students had the choice of attending pep rallies in the gymnasium or we could stay in our classrooms and “work on schoolwork” (yeah, right).

During this particular pep rally, I decided to stay in the classroom because I didn’t feel like going. It was just me and a guy who, up to that point, I didn’t really know. His name was John Sichler. The teacher had told us that we would be watching a cassette driven film strip (remember those?) when everyone else came back from the rally.

John showed me the new Alice Cooper tape that he had recently bought and said that he wished we could listen to it. I suggested that we play it in the projector since no one was around. We listened and enjoyed it immensely.

As it got closer to time for our classmates and teacher to return from the rally, John and I had a brilliant idea. After everyone came back to class, Mr. Purdy (our teacher) had us close the drapes, turn on the film-strip projector and push “Play” on its cassette.

The look on Mr. Purdy’s face as the projector blasted the opening strains of “School’s Out” instead of whatever masterpiece Bell & Howell was going to give us was absolutely priceless, as was the roars of laughter from our classmates. Surprisingly, John and I didn’t get in any trouble over that, but it kicked off a great friendship.

John was a year ahead of me and he suggested that I sign up for Men’s Chorus the second semester. He was in it, and he said it 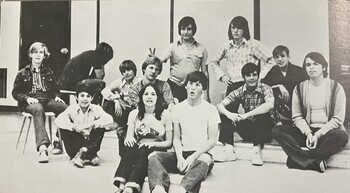 John Sicher Giving Bunny Ears & Yours Truly To His Left was fun. I did. We were in Concert Choir together the following year. During our singing “career” there, we managed to drive Mrs. Caldwell a bit bonkers from our Tom Foolery.

We took music theory together. We also started up a little side business doing DJ work at some of the elementary schools in the Phoenix area. John was the DJ, and I shared my records and danced with some of the girls. One of those times, I was accused of making a derogatory remark about one of the girls and her big brother – complete with a big knife scare on his exposed belly – wanted to alter my body – perhaps with a knife scar of my own. Dunno.

As I was talking my way out of the cosmetic surgery, John hurried and packed everything up into his ’67 Mustang and had the engine running as I made quick amends. We got the heck out of Dodge before big brother decided to change his mind.

Somewhere in all of that, John and I decided we might try out for some sort of talent thing. I can’t remember where it was going to be held but I seriously doubt we would’ve thought about performing at school. I do remember that the song was an Elton John song that was title song for the soundtrack for the movie, “Friends”. John played the piano, and I played a very feeble guitar. Though we never publicly performed the song, he and I would often reference it whenever we talked – both at high school and in the years after. He even referenced the song when he signed my yearbook my Junior year.

After getting off work at night at the local Whataburger, John would come by the house. We’d listen to music and chat about the girl problems we both found ourselves with. After he graduated from high school, he pursued a career in radio – both as a DJ and as an amazing engineer. 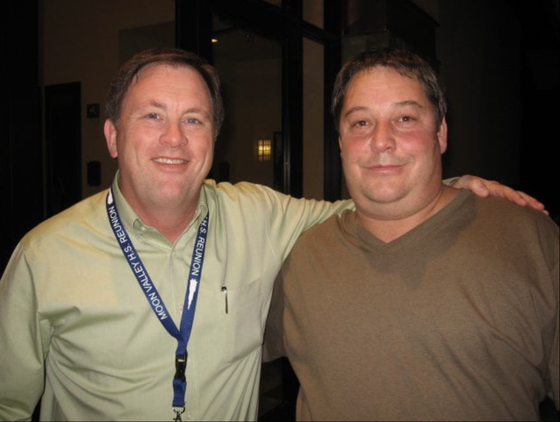 John Sichler (R) and I - Class Reunion 2010Over the years, we would touch base with each other. The last time we saw each other was at our school’s “30-Something” multi-class reunion twelve years ago. John was the DJ. Since that reunion, we communicated off and on. One of the last times was when he was advising me on bringing Boomerocity to radio.

On February 8th (this past Tuesday), I got word that one of our mutual friends had passed away. John was closer to her than I was. Cherylanne DeVita was a successful businesswoman and served on the board of Alice Cooper’s Solid Rock Foundation. I shot John a note to see if he had heard the news about Cherylanne. The reply that I received back was not what I expected.

John’s daughter replied and let me know that John had died.

To say that I was stunned would be an understatement. To lose two high school friends within 24 hours was more than my feeble mind could comprehend. As I read – and re-read – the note from John’s daughter, “Friends” started playing on the jukebox in my mind . . . and tears streamed down my face.

As baby boomers, we’ll all experience these same kinds of events. When we do, we are forced to come to terms with our own mortality. We need to remember in times like these to savor the moments; to not be afraid to show and express love; to live life to the fullest; to be right with our Maker.

Rest in a much-deserved peace, John. I’ll continue to smile every time I think of you.