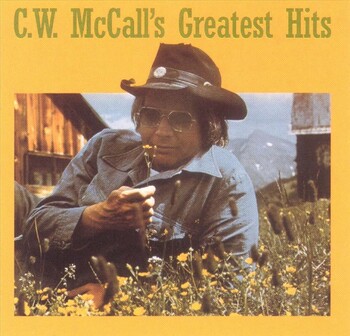 Click Above To Order Your Copy“Mercy sakes alive, looks like we got us a convoy . . .”
From the song, “Convoy” by C.W. McCall

This weekend C.W. McCall died at the age of 93 after a battle with cancer. News of his passing brought back memories of the days when his songs were all over the air waves. It also reminded of my late friend from high school, Steve Matthews. He and his family were big time CBers back when that was all the range.

In 2009, I wrote the piece, below. It was as much a commemoration of his life and passing as it was an encouragement to re-establish contact with friends from our past. As you might expect after almost thirteen years since I first posted this piece, the references are a tad dated.

I’m resharing this piece (with few changes and revisions) as a tip of the hat to C.W. McCall and the impact he had on the American music scene. As long as baby boomers are on the face of this planet, he will never be forgotten.

The re-sharing of this piece is also to remember my dear friend, Steve. This August he will have been gone twenty-one years. Since then, his mom, Jean, joined him. Neither of them has never been forgotten and are thought of often.

The following is the original piece (with edits):

When I was a little kid, say six or seven years old, we would go to my grandparents in Madisonville, Tennessee. It was always full of unique surprises and experiences.

For one, they had an indoor toilet and a potty-line, I mean, party line phone service.

I know that you're dying to hear what the deal was about the indoor toilet so I'll start with that part of the story.

See, my other set of grandparents lived about an hour north of Madisonville in the little town of Maryville (locals pronounced it, "Mur-vul". ). They had regular phone service - not a party line. However, they didn't have an indoor bathroom. At least, they didn't have one until I was in third grade.

Yes, folks, they had an outhouse! They were uptown, though, because they had a two-holer and toilet paper instead of catalogues. But I digress.

I hated the outhouse. It scared me to death. I somehow had the idea that if I sat down on one of the two holes, a monster would rise up and bite me on the butt. While many things have wound up biting me on the butt in my life, a monster in an outhouse has never been one of them.

So, whenever we would be in Mare-vul, and nature called on my tender young body, I would run to my Mom and say, "Let's go to Madisonville NOW!" Since that wasn't very practical, I was forced, by necessity, to visit the outhouse . . . as fast as I possibly could!

Where was I? Oh yeah! Party lines!

Whenever we were in Madisonville, and I didn't have to worry about getting eaten by the booty monster, I would hang out by the farmhouse's one telephone which rested on a table in the entry hall. There I learned the fine art of eavesdropping as it was meant to be. I learned to very gently pick up the phone and listen to the neighboring farm folks chat and gossip. Whenever they were through, I would hang up and dutifully report the latest and greatest news to my grandmother.

Fast-forward just a bit to those incredible days in the Seventies when, much to the chagrin of commercial truckers everywhere, everybody and their brother had a CB radio.

My family didn't have one but one of my good friends, Steve Matthews, and his family, had TWO of them. They had a base unit and one in the family car that Steve usually got to drive whenever he wanted to.

On Friday and Saturday nights, Steve would drive around the streets of Phoenix and chat with the other CB enthusiasts. Mr. Matthews would stay at home and listen in on all the channels and catch up on gossip and news - not at all unlike the ol' party line in Madisonville.

While nothing important was accomplished during those excursions on the airwaves, I did notice that there was a sense of community and belonging amongst the CB-ers. You couldn't miss the camaraderie as their chatter crackled through the air.

It was thoughts like these that flooded my mind as I joined Steve's family eight years ago to bury him. If my memory serves me correctly, his parents found him at his computer as if he had fallen asleep, his hand still resting on the mouse. It's likely that he was participating in the new millennium's version of CB chatter: an online political chat room, which he always loved.

With Steve's family and friends commemorating the eighth anniversary of his passing this week, I couldn't help but reflect on the power and importance of communication with friends.

The vast majority of us today are not members of the CB community. However, we have much more mobile and efficient tools at our disposal to recreate those lost days of teenaged camaraderie. With the internet, e-mail, texting, and unlimited long distance available to us, we can now track down friends from our youth and rekindle friendships. I could go on forever about having experienced the incredible joy of finding friends from my ancient past.

You say that you don't know where to start? Try signing up with one of the online class reunion websites like Classmates.com or Mylife.com. You can also try tracking friends down through MySpace but my favorite is Facebook. Through those sites and internet search engines, I've been able to track down countless grade school and high school friends (My personal best is finding a friend from second grade). You'll quickly find that the bonds of friendship can actually grow stronger by reaching out and reconnecting with old friends

So, why don't you track down an old high school friend by one of these "party lines"? If you're both living near each other, why not get together for coffee or a meal to remember old times?

Who knows what kind of convoy of friends you can round up?

Jason Sawford
5572 views
Posted September, 2012   When I was a teenager growing up in Phoenix, Arizona, Pink Floyd was...