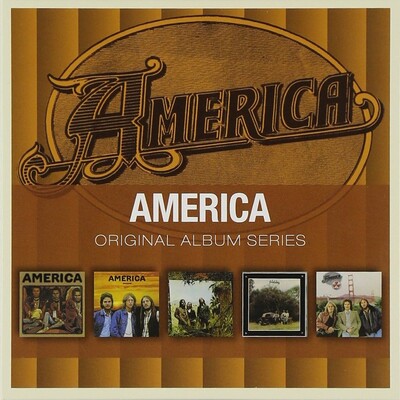 Click Above To Order Your Copy“If living don’t come easy, don’t stop your own voice, ‘cause the worst part of living is havin’ no choice . . .”
From "Never Found The Time" by America

It’s been eleven years since I first posted this piece. I haven’t re-shared it until now. It references the passing of America co-founder, Dan Peek. I’m told that my interview with him was the last that he granted before his shocking and untimely death. While I’m proud of the interview I conducted with him (it was in two parts due to it being two different conversations we had) – here and here), I would have given anything if my interview was not the last one he gave.

I wish he were still alive and making music.

I wish that he and his former band mates would have mended fences if for no other reason than to enjoy their friendship again.

I wish he had lived longer so I could’ve interviewed him more.

But none of that was meant to be.

A couple of years ago, I compiled my two interviews with Dan and sent the audio file to his brother and sister so that they could enjoy it, let it heal, and maybe feel as if they were talking to him again. I don’t know if I’ll share those files publicly. If I do, it will only happen with the blessing of his brother and sister.

In the mean time, here’s a reposting (with some minor changes) of my thoughts a week after Dan’s passing.

Here is the revised piece that I originally wrote eleven years ago:

Last week has been one for my personal record books. Early Monday morning, I was starting to write as I do every morning. This particular morning, I was about to begin the transcription of my interview with the former member and co-founder of the group, America, Dan Peek, that had taken place four weeks before.

Just as I was about to push the “play” button on my recorder, I received a message from Steve Orchard, a mutual friend of Dan and me and who was responsible for getting us together for the interview. His message read, “Randy--Brace yourself--Dan Peek passed away last night in his sleep.”

I sat there stunned as those words sunk in and a chill ran through my body. As is often the case when we learn of the passing of someone we know or are familiar with, I began to think about the brevity of life and how we just never know when our, or someone else’s, life on this earth will be over. Finished. No rewind. No do-overs. It’s done. Over.

The splits with former band mates that Dan and others I’ve spoken with are well documented and have been hashed and re-hashed ad nauseam and I’m not going to replay it all here. What I will say is that, to a person, each one that has been involved in a major band split has expressed bewilderment. The bewilderment over the fact that there was no willingness expressed by the former band mates to get back together to give their fans what they want: a ride back down memory lane if not also for the band getting back together to make some great, new, memorable music.

I do hope that all the bands that have split up over who knows what will take the time to set aside differences, mend fences, re-kindle old, cherished friendships and move forward with a new kind of relationship on stage and off. While we’re clucking our tongues in agreement with that, we should also look to see if there’s room for that same kind of fence-mending with people in our own lives.

Happiness is a choice and, to steal and paraphrase some words that Dan Peek penned over 50 years ago, the worst part of living is when you no longer have a choice to make because it’s too late.

Act now, while you still have a choice.

Rest in peace, Dan Peek, and thanks so much for the musical memories.