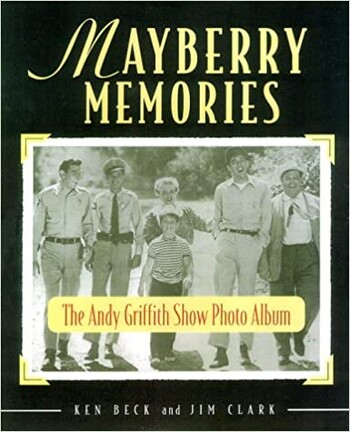 Click Above To Order Your Copy“There’s something about Mayberry and Mayberry folk that never leaves you. No matter where life takes you, you always carry in your heart the memories of old times . . . and old friends. Here’s to all of us . . . old friends.”
Andy toasting the town of Mayberry during Barney and Thelma Lou’s Wedding
(Source: Mayberry Memories: The Andy Griffith Show Photo Album by Ken Beck and Jim Clark)

It’s been almost a year since I wrote “Part One” (here). It’s not that I haven’t thought about it writing part two. It’s just that I didn’t think the time was right until now.

Recently, My sister and I took my eighty-six-year-old dad for a drive to his hometown. I’m told that it’s one of the poorer counties in Tennessee – or, at least in East Tennessee. It doesn’t matter. It’s home to my dad and we all have memories tied to that poor farming town.

Our trip focused mostly on the courthouse square of his hometown and on the now-defunct college in that town. Dad showed us where the gas station was where he worked as a teen as well as the movie theater was that he’d watch movies for fifty cents. He told of the African American man who owned the shop next to the gas station who befriended him and would come to visit my dad on his breaks.

We drove though the campus of the local college that closed last year. My dad drove one of his big sisters there for her teacher certification classes. Over the hill from the college was the church where my mom and dad met. On the other side of town was the A&W drive-in where dad and his friends would hang out and drive around.

The gas station, theater, and the African American man’s business have been torn down many years ago. As I already said, the college is closed. The only thing still around today is the A&W drive-in and, yes, they’ll still serve you the best root beer in the world in frosted mugs. The courthouse is still around that my grandfather met up with the other farmers from town and converted the steps to their own spit and whittle area.

All those things are ghosts and memories from the past. I’d be lying if I said that I don’t long for simpler days like those. They weren’t perfect and were often hard, but they made my dad the wonderful man that he is today. That man has made me the man I am and the woman that my sister is.

I share all of this because it has gotten far too easy to cast aside our pasts and heritage with total disregard for how important it is to us. As much as some of us might wish, we’re tied to it. We can’t totally untie ourselves from it – whether good or bad. Our pasts have influenced us and, consequently, the next generation.

I’m of the opinion that, while we can’t (and shouldn’t) live in the past, we should remember the lessons from it, embrace the best part of it, and use it all to positively influence the world around us today.