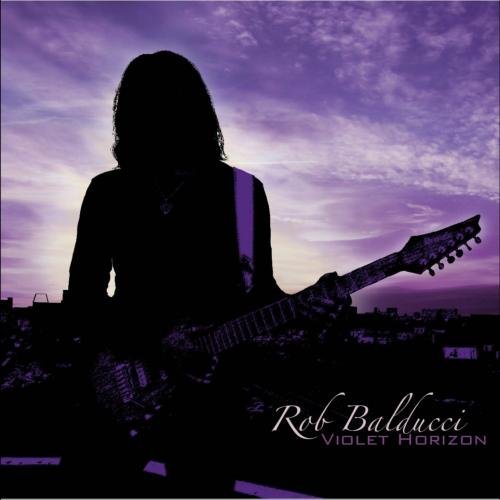 In the movie, Amadeus, there’s a scene where, after a brilliant performance of one of Mozart’s pieces, Emperor Joseph II says, “My dear young man, don’t take it too hard. Your work is ingenious. It’s quality work. And there are simply too many notes, that’s all. Just cut a few and it will be perfect” to which Mozart replies, “Which few did you have in mind, Majesty?”

I open with this quote – not because I feel that Rob Balducci’swork on Violet Horizon has “too many notes” but, to state what Mozart implied, every note on this album is excellently written, perfectly placed, and not one excessive in the slightest. I would wager if one note was removed from this masterful work of guitar art, the masterpiece would implode on itself.

Violet Horizon is a work of musical genius wherein each and every song conjures up rich, vivid and brilliant mental images and deep, heartfelt moods from within the listener. If the listener goes the extra step by listening to this album through a pair of excellent headphones, they’re liable to fall through an stereophonic rabbit hole, never to return.

Nor would they want to.

The title track from the album sets the tone for the rest of the disc. Images of dawn or sunset and the moods such a scene evokes is melodically recreated in this two minute tune. Immediately following is the song, Friction. I’m not sure what Rob had in mind when he wrote this song but, in my mind, the song is what I experience in my typical work day after I’ve soaked in the tranquility of a Violet Horizon.

Another beautifully frenetic tune is Devil’s Juice, that features some incredible solo work by guest guitarist, Dave Weiner (second guitar in Steve Vai’s band). Another great duet on the album is Sleestack with UK guitarist, Guthrie Govan. Both of these tunes are special treats that you’ll not want to miss.

Don’t even try to make me pick a favorite. I couldn’t do it if I tried. I love the whole album. However, songs like Trinity cause me to think of Christ’s trek on the Via Dolorosa and the agony of His passion. Float will have you feeling like you’re floating safely on a raft on a tranquil sea without a care in the world. Suggestion: Take that tune and create a playlist on your iPod with nothing but, say, 30 entries of Float and you’ll sleep like a baby in the womb. The bonus track, Ilu-905, is equally tranquil.

Violet Horizon is a must-have for connoisseurs of great guitar work. You’ll want this disc in your hands sooner rather than later.