Wreck and the Mess 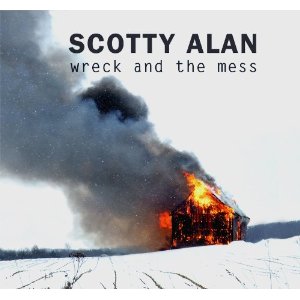 Wreck and the Mess is the debut album of Scotty Alan, a former punk rocker who resides in “The Yoop” (the upper peninsula) of Michigan. Key word, “former”, for Scotty is now a full-fledged country/rockabilly crooner. I would say that, if various artists were food ingredients, Alan would be what you would get if you put Dylan, Springsteen and Petty into a blender with a generous helping of The Band for good measure.

Hearing that this line-up is on the disc, you know you’re going to be in for an audiophonic treat.

The CD is arranged in musical, sequential order telling the story of a relationship going from bad to dead. One Boomerocity favorite from Wreck and the Mess is the melancholy Long Way From Laughing. I would strongly suggest that GAC or CMT pick this tune up and drive it like they stole it on their programs.

Other Boomerocity favorites are the woeful Down Before I Fall (“. . . And my eyes are closed, hopin’ forever won’t end”), Was It Ever? (“Could ths be a time for leavin’, emptiness has found a home . . .”) and Dusty Hollow (“Yesterday’s dreams are still in tow, hard to say where to go from here. Trust your mind it’s never near . . .”). As does the whole album, these tunes betray the fully developed songwriting skills of Mr. Alan.

Don’t just take my word for it. Listen to what a Rock and Roll Hall of Famer (Ian McLagan) has to say about him: “Reading Scotty's lyrics in my own personal trailer. Beautiful writing, so full of pain, especially Dam and Sinkin' In.”

Download Wreck and the Mess by clicking on the icon above. Also, you can keep track of Scotty Alan at www.scottyalan.com – and you’ll want to because my “knower” knows that we’ll be seeing a lot more of this guy in the years to come.

Scotty Alan, Wreck and the Mess