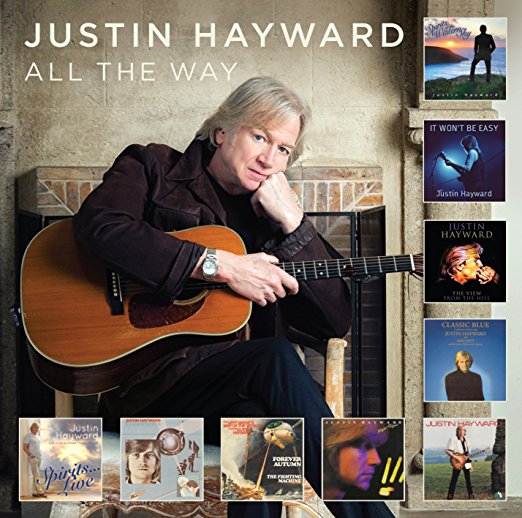 The Moody Blues’ Justin Hayward has recently released his latest album in the form of a compilation of work that spans his solo career. It includes Justin’s solo songs, a recording with The London Philharmonic Orchestra, solo live performances and unique versions of classic Moody Blues tracks and the brand new song “The Wind Of Heaven.”

Justin Hayward is the possessor of one of the finest and most distinctive voices in melodic rock. Guitarist, vocalist and songwriter for The Moody Blues since 1966, Justin continues to perform with the group, and alongside his work for The Moody Blues, he has developed an acclaimed and successful solo career.

All The Way brings together many of his best-loved tracks from his work outside the group. From his top ten hit song “Blue Guitar“, included here in its original version recorded with members of 10cc, through his global smash “Forever Autumn“ from Jeff Wayne’s musical version of War Of The Worlds and on through tracks from solo albums “Songwriter,” “The View From The Hill“,“Classic Blue“,“Moving Mountains“ and “Spirits Of The Western Sky“ before concluding with the brand new track “The Wind Of Heaven, “ written for the film of the same name, All The Way is the perfect collection for any fan of Justin Hayward.