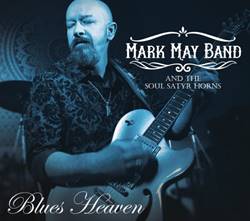 Blues Heaven is the 6th album for Columbus, Ohio-based Mark May and his band, and its 13 tracks represent a new height in blues power performances and songwriting chops for the celebrated musician. The new album also features backing by The Soul Satyr Horns, who provide extra punch to Mark and the band’s incendiary blues riffs.

“I think Blues Heaven is the most truthful CD that I’ve ever done,” admits Mark May. “While there are songs on the album about the good times that I've had, others express my own personal struggles and tell the story of my life. I really enjoyed working with my band, The Soul Satyr Horns, and some of my good friends who all contributed in a big way to make this album possible."

The album’s opening track, “Boom Boom,” shows a strong Albert Collins influence with its stinging blues guitar licks, and elsewhere Mark May showcases his mastery of a number of other blues styles, ranging from Chicago (“Money” and “Put Down that Poison”) and Gulf Coast sounds (“She’s a Keeper” and “Leaving Houston”) to Southern Rock power movers (“I’m Her Fool” and “Almost Like a Suicide”), reminiscent of his time playing with one of the best-ever practitioners of that genre, Dickey Betts, in 2000/2001. And on the powerful title track, May summons up the guitar ghost of Jimi Hendrix and others for some exquisite playing on a song that explores the life of a bluesman.

Mark May will support the release of Blues Heaven with a number of Midwestern dates, before hitting the road for numerous festivals over the summer. In the past he’s been a veteran road warrior, with extensive major date touring both in the USA (Telluride Blues and Brews, Mississippi Valley Blues Fest, King Biscuit Festival, Anglesea Blues Festival, etc.) and Canada (Tremblant International Blues Festival), as well some overseas touring in France. He was also the opening band for The Allman Brothers Band’s 1997 Amphitheater Tour.

Mark May’s interest in playing began with his older brother teaching him the basics of guitar and turning him onto such artists as the Beatles and Jimi Hendrix. He also has a lot of country influences, too, with both his mother and uncle being country/bluegrass singers and songwriters. The former Dickey Betts and Great Southern guitarist and vocalist discovered the blues when his aunt lent him a copy of B.B. King’s 1971 classic Live in Cook County Jail album when he was all of 11 years old and it’s been a non-stop run since then.

Dickey Betts was one of May’s biggest early supporters. “When I heard his first CD, I was blown away,” Betts commented. “Mark is one of the best blues-rock artists to come along in years! With great singing, songwriting and guitar playing, he reminds me of everyone from Albert Collins to Stevie Ray to Carlos Santana. Hell, I even heard a couple of my licks in there!”