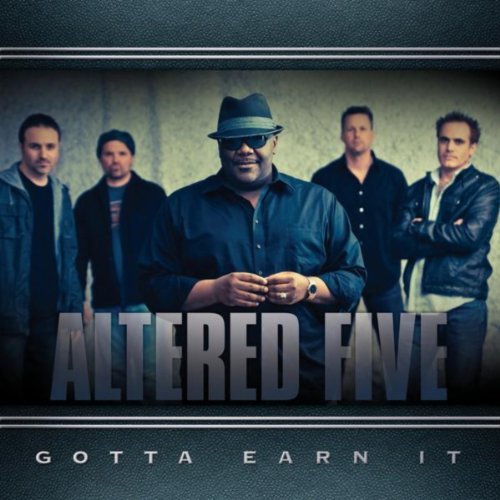 I’ve only very recently became aware of the proclaimed “staple of the Midwest’s band scene” (as quoted in the Milwaukee Journal-Sentinel), Altered Five. Their delectable brew of blues and soul has caused me to join a wide audience that is taking notice of this highly talented band.

The group’s sophomore album, Gotta Earn It, is a ten-song set featuring seven original tunes.  According to the Minneapolis Star Tribune, frontman Jeff Taylor’s voice is “gloriously gritty” and I would have to wholeheartedly agree with that description. The Shepherd Express simply states that Taylor sounds like “a voice from Stax/Volt 45s”.

Now that’s what I call a compliment!

Altered Five formed in 2002 and quickly gained a reputation for its inventive arrangements and distinctive sound. Isthmus magazine called the band “a rising blues unit” and OnMilwaukee.com declared, “The group delivers the element of surprise.”

Gotta Earn It showcases “JT” Taylor’s powerful voice that anchors the sound and drives home the message in songs like the brooding ballad Three Wishes, the wistful, burning blues of Older, Wiser, Richer and the yearning Mona Lisa. The rhythm secion of drummer Scott Schroedl and bassist mark Solveson grooves hard and enjoys telepathic interaction with keyboardist Ray Tevich and guitarist Jeff Schroedl.  Guitar World raves that Schroedl has “hi-tech chops” and contributes “superlative solo work.”  The group also puts its stamp on three covers: a driving, bluesified take on the early Marvin Gaye hit Ain’t That Peculiar; a revved-up reading of Buddy Guy’s 1961 Chess recording Watch Yourself’ and the cool, sassy groove of another Motown original, You’ve Got To Earn It.

It’s been said that “the blues is a feeling.”  If you love the blues and love to hear new blues tunes and not just an album full of covers, then you’re definitely going to want to buy Altered Five’s Gotta Earn It.  You’ll become an instant fan . . . for life!