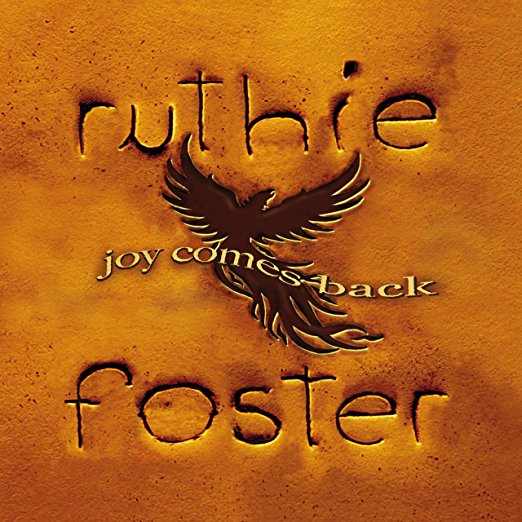 Boomerocity loves this album. Buy it. That should be 'nuff said but, for the rest of you, here's more.

In the tightknit musical community of Austin, Texas, it’s tough to get away with posturing. You either bring it, or you don’t.

If you do, word gets around. Praises are sung. And one day, you find yourself duetting with Bonnie Raitt, or standing onstage with the Allman Brothers at New York’s Beacon Theater and trading verses with Susan Tedeschi. You might even wind up getting nominated for a Best Blues Album Grammy — three times in a row. In addition to your six Female Artist of the Year/Koko Taylor Blues Music Awards.

There’s only one Austinite with that résumé: Ruthie Foster. And when she releases Joy Comes Back, her eighth Blue Corn Music album, on March 24, 2017, the Recording Academy might want to put its engraver on notice. Because every note on it confirms this truth: It’s Ruthie’s time.

When she recorded these songs, Foster wasn’t merely singing about love and loss; she was splitting a household and custody of her 5-year-old daughter. Music was her therapy.

In the warm confines of Austin producer and former neighbor Daniel Barrett’s studio, she found a comfort level she’d never before experienced while recording. It gave her the strength to pour the heartache of her family’s fracture and the cautious hope of new love into 10 incredible tracks, nine of which are by a diverse array of writers ranging from Mississippi John Hurt, Sean Staples and Grace Pettis (daughter of renowned folk singer Pierce Pettis), to Chris Stapleton and Black Sabbath. Yes, Black Sabbath: Foster reimagines “War Pigs” as a jam session with Son House. She also covers the Four Tops’ “Loving You Is Sweeter Than Ever,” written by Ivy Jo Hunter and Stevie Wonder.

At one point, Barrett described the album to Hood as “some blues, some folk, some soul, some rock, some gospel.” Hood replied, “Sounds like Ruthie Foster music.”

Exactly. And “Ruthie Foster music” is an adventurous trip, harboring in places where stylistic limitations don’t exist and anything is worth trying. Which explains how she can turn even a song she was initially unsure about, “Loving You Is Sweeter Than Ever,” into a gospel-pop tour-de-force that could make Aretha Franklin jealous. “Once in a while I get a song I just resist, but I go ahead and start feeling what it feels like to sing it,” Foster explains. “That was one of those songs; it just felt good to sing.”

As for motivating herself in the studio if sparks don’t flash immediately, she says that’s been part of the job. “I go in, I’m prepared, I sing, and then I go home.” What she didn’t do in the past was hang out in the studio. Foster and Barrett had already spent many caffeine-fueled hours discussing music and life before recording; that continued as they worked — with occasional breaks to catch a loose neighborhood dog or entertain an ailing child. “Those small, real-life interruptions made it really nice for me,” she says. “They made it less like a job, which opened me up creatively.”

They weren’t even planning an album at first; they’d just decided to work up some songs, starting with “Forgiven,” by the Weepies’ Deb Talan. A gorgeous, majestic and moving ballad, it’s the perfectly placed final track. “This song said so much about what I was going through,” Foster says softly. “To have it be the catalyst for this album was a gift.” She cried during the playback — for the first time in her career.

That emotional nakedness is exactly what makes Joy Comes Back so extraordinary. On songs such as Pettis’ powerful “Good Sailor,” Foster, a Navy vet, plunged right into lines like I've been tossed around in the deepest blue/I almost drowned a time or two/But easy living never did me no favors/Smooth seas never made a good sailor.”

“It’s written so well, I was upset that I hadn’t written it myself,” Foster says, laughing. When Pettis heard the track, she told Foster, “It’s your song now.” Foster also claimed Pettis’ “Working Woman,” a rousing soul anthem of empowerment — and righteous anger.

She takes listeners to church on the gospel-soul title song, augmenting Staples’ lyrics with some of her own. When she told Barrett that in her childhood church, percussion was provided by the sisters’ tapping heels, he borrowed a neighbor’s high-heeled shoes and miked his well-aged oak floor. They banged away like kids.

“I wanted something unexpected that would be cool to do at festivals,” Foster says. “To get people out of their seats or tents to find out what the heck is that? Who is this little ol’ short black woman doing Black Sabbath on a resonator?”

On past albums, Foster says, “It was about being a professional singer, a  hallelujah-chorus girl. But I’m a real person, and relaying that through this music and the stories behind it is really important to me. I haven’t written much because it’s been rough for me to put pen to paper, but Dan, having spent at least a year and a half being a listener and witness to my life, found these songs that have a lot to do with where I was and where I am — and who I am.”

For 2014’s Promise of a Brand New Day, producer Meshell Ndegeocello encouraged her to write originals. But a true artist can make any song his or her own, no matter who wrote it. And truly extraordinary artists do it so well that their version becomes definitive.

“Putting myself into another person’s words was huge for me,” Foster says. “I connect more to my voice these days than I do to anything. Even speaking — that was something my grandmother worked with me on, because I would stutter. It was a big deal for me to connect to words as a young kid. So I’m coming full circle.”

Adds Barrett, “It was one of the privileges of my artistic life, getting to watch an artist of her magnitude find her voice anew. You could drop her anywhere on earth and people would feel the truth in her voice.”