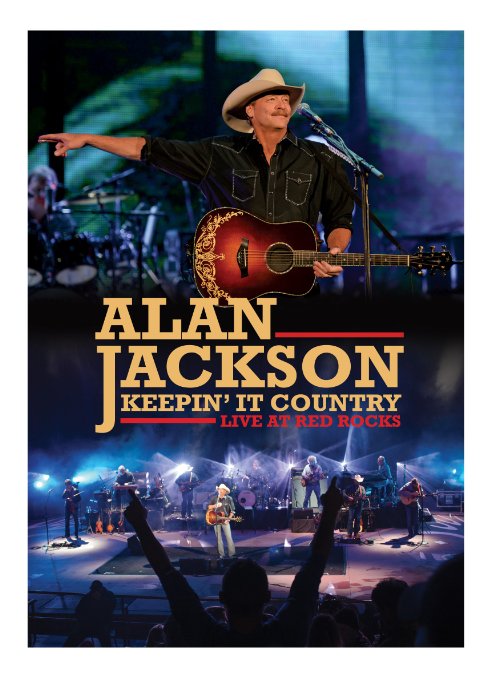 With nearly 60 million albums sold worldwide, Alan Jackson is one of the best-selling country artists of all-time. A member of the Nashville Songwriters Hall of Fame and the Grand Ole Opry, Jackson has received over 150 industry awards, including 18 Academy of Country Music Awards, 16 Country Music Association Awards, two Grammys, and ASCAP’s Founders and Golden Note Awards. He was the first recipient of ASCAP’s Heritage Award in 2014, earning the accomplishment of most performed country music songwriter-artist of ASCAP’s first 100 years. Having released more than 60 singles, with 50 landing in the Top 10 and 35 of which have held the #1 position, Jackson resides in elite company with Paul McCartney and John Lennon among songwriters who have written more than 20 songs that have hit #1.

Adding to Jackson’s vast and deep catalog of work is Keepin’ It Country – Live At Red Rocks. Filmed on May 17, 2015 before an at-capacity crowd at Red Rocks Amphitheatre in Morrison, Colorado, in the midst of Jackson’s 25th Anniversary Keepin’ It Country tour. With a career spanning 23 albums deep (including two Christmas collections, two gospel albums, and his highly acclaimed The Bluegrass Album), Jackson’s insightful lyrics and inspired songwriting reflect the feelings of everyday life. That honesty has earned him the adulation of generations of fans. The 26-song rich set features performances of timeless classics from across his career (“Gone Country,” “Good Time,” “Small Town Southern Man,” “Chattahoochee,” “Where Were You (When The World Stopped Turning),” “Remember When,” “Where I Come From,” “It’s Five O’Clock Somewhere,” “Mercury Blues”), as well as songs from Jackson’s 2015’s smash album Angels And Alcohol, which debuted at #1 on the Billboard Country chart and #5 on the Top 200 (“You Never Know,” “Angels And Alcohol”).

The influence of Alan Jackson is immeasurable, and Keepin’ It Country – Live At Red Rocks is an incredible celebration of an essential country music icon.