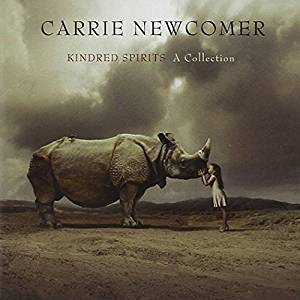 Carrie Newcomer’s music has always explored the intersection of the spiritual and the daily, the sacred and the ordinary. Over the course of her career, she has become a prominent voice for progressive spirituality, social justice, and interfaith dialogue.

Newcomer’s ability for sharp observation of the world lead the Dallas Morning News to rave, “She's the kind of artist whose music makes you stop, think and then say, ‘that is so true.’” She has been described as “a soaring songstress” by Billboard, a “prairie mystic” by the Boston Globe and Rolling Stone has declared that Newcomer “asks all the right questions.”Author Barbara Kingsolver wrote, “She’s a poet, storyteller, snake-charmer, good neighbor, friend and lover, minister of the wide-eyed gospel of hope and grace.”

The two new songs, The Speed of Soul and A Long Christmas Dinner, were recorded and produced by Newcomer, Robert Meitus and David Weber at Airtime Studios.  The Speed of Soul is a poignant exploration of a more deliberate relationship to time in an increasingly fast-paced culture.  A Long Christmas Dinner creates a portrait of life and family as part of an ongoing continuum.  In the songs I Believe, Geodes and Holy as a Day Is Spent, Newcomer quietly and beautifully describes the presence of something extraordinary in the midst of our ordinary days. She sings, “God walks around in muddy boots, sometimes rags and that’s the truth” and “Folding sheets like folding hands, to pray as only laundry can.”

Before and After explores the large and small experiences by which we mark our lives through a haunting duet with Mary Chapin Carpenter, resulting in a remarkable combination of two of acoustic music’s most rich and resonant females.  The Gathering of Spirits, featuring Alison Krauss, is a clear-voiced and crystalline celebration of life. Betty’s Diner is a hymn to the human condition and the presence of grace in something as small as a shared meal or cup of coffee — “Here we are all in one place, the wants and wounds of the human race . . . let her fill your cup with something kind, eggs and toast like bread and wine.”  Also included are the spiritual and tender Sparrow and the wry and raucous Where You Been.  The sensual I Do Not Know Its Name describes poetically and lyrically the sacred we experience, but which cannot be named. Reaching into her early work, A Whole Lot of Hope, Bare to the Bone and My True Name are snapshots of what has always been present in Newcomer’s songwriting and has only deepened and expanded with each recording.

On the topics of the new collection, spirituality and songwriting, Newcomer writes, “I am one of a growing number of people who don’t want to put the sacred in such a small container. I am disturbed that one very narrowly focused and extremely political brand of Christianity being called the ‘religious voice.’ There are wide communities of spiritual people who believe that walking this world in love and compassion is about feeding the hungry, providing for the poor or sick, caring for our elders, making sure that the table of love includes and welcomes everyone, educating our children and young people, honoring our beautiful and interconnected planet. These communities believe that women are equal spiritual beings, and that the highest and most honorable work is creating a less violent, more just and kind world. Isn’t a life of compassion bigger than a catch phrase or sound byte? Isn’t love wider and deeper than fear?” Speaking more to this point, she shares, “If a spiritual leader is teaching hate, it is not spiritual message, it is political message.

“My most effective and powerful voice will always be my truest voice. We all know when a song is candy-coating things or just going for shock value. But when a song places its finger on the open palm of something true, it shakes the world just a little bit. Why would I want to do anything else as a writer, or as a person? Part of my work as a writer is to put into language and music moments of wonder that have no words.”

The result is Kindred Spirits: A Collection, a resonant soundtrack for a world that is both sacred and ordinary, reflective and forward thinking.

All rights reserved.  Permission for use may be obtained by contacting Boomerocity on this site.