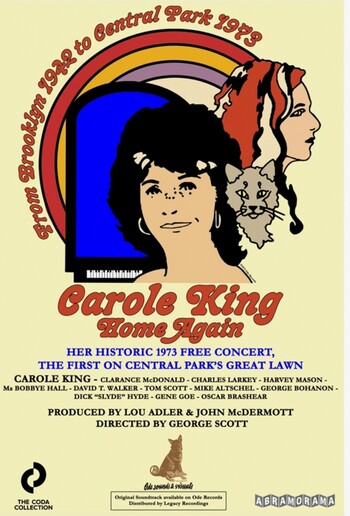 The brand new feature-length concert documentary “Home Again: Carole King Live In Central Park,” which presents musical icon Carole King’s triumphant May 26, 1973 homecoming concert on The Great Lawn of New York City’s Central Park before an estimated audience of 100,000, will premiere January 19 at New York’s IFC Film Center via Abramorama. The film will then be released wide on February 9 (also King’s birthday) streaming exclusively on The Coda Collection. Directed by George Scott and produced by Lou Adler and John McDermott, the film presents the complete multi-camera 16mm footage filmed and recorded by Adler in 1973 but never before released.

Alongside the complete performance footage is the behind the scenes story of King’s remarkable transformation from an in demand, staff songwriter beloved for such timeless Goffin and King classics as “(You Make Me Feel Like) A Natural Woman” and “Will You Love Me Tomorrow” to an iconic artist in her own right. The May 1973 performance captured King at her critical and commercial peak, basking in the enormous popularity of her definitive album Tapestry. “We wanted to do something special with Carole in New York,” remembers Lou Adler. “I got in touch with Ron Delsener and told him that Carole was coming home to New York. This was where her upbringing took place and where she got her start in music. New York was everything to her and she wanted to give something back to both her hometown and devoted fans.” Adler and legendary New York concert promoter Delsener then agreed to stage a free concert—the first ever—on Central Park’s famed Great Lawn. The event changed the landscape of live performances in New York, shepherding in an era of legendary performances in Central Park that continues to this day.

New interviews with King, Adler, Ron Delsener and legendary Woodstock and Monterey Pop lighting and stage manager Chip Monck set the scene for her extraordinary performance. To the delight of the audience, King moved easily between her signature classics and songs from her soon to be released 1973 album Fantasy. King rarely performed in concert during this era despite the enormous commercial success she had enjoyed. However, on this special occasion, she presented her performance in two parts—first alone, on piano and then fronting a powerhouse 11-piece band.

“I brought Hank Cicalo, my recording engineer from Los Angeles, out to Central Park to record the show as it might possibly become an album,” Adler explains. “Then I had th notion, having done the film Monterey Pop [Adler had produced the groundbreaking 1967 music festival together with John Phillips] I felt that something this big should be filmed. I had no idea what I was going to do with the film at that time, but I felt that something this important should be documented.”

In the aftermath of the Central Park performance, Adler took the film and recordings back to Los Angeles where it remained unreleased for 50 years. “Recently, John McDermott came to me and said, ‘This should be a film. This performance should be seen.’” explains Adler “His interest excited me and I said, ‘Yeah, let’s do it.’. I contacted Carole and we got started.”

The resulting film, Home Again: Carole King Live In Central Park provides an inside view of a generational talent at her prime, performing one of the biggest and most momentous concerts of her career in the city where she was born. “Tapestry had become such a huge hit, and I really wanted to give something back to the people,” remembers King. “When I first walked on stage, in Central Park, in front of the Great Lawn, and it’s full of people…it was kind of terrifying for a minute. Then the crowd began to cheer, and it was like a wave coming toward me. There was just so much love. It was too much to take in, but I realized all I had to do was sit down and start playing. They were there to hear me. I knew how to deliver, and that’s what I sat down to do.”

Abramorama will release the film theatrically at New York’s IFC Film Center starting January 19 with a special presentation featuring a Q&A with Lou Adler. Additional theatrical screenings in other US cities as well as international markets will also be announced. The IFC Center, the ultimate entertainment space for New Yorkers seeking out the best in independent film, opened in June 2005, following an extensive renovation of the historic Waverly theater. The film will also be presented as part of a special event at the Grammy Museum in Los Angeles on January 26 where Adler and other special guests will be featured.

The film will be available to stream exclusively on February 9 on The Coda Collection — a unique, subscription streaming offering featuring an exclusive, curated selection of iconic music documentaries, concert films, and episodic series via Amazon Prime Video Channels, paired with a complimentary website exploring new perspectives on music.

On February 10, a live album, Home Again, will be released digitally via Ode Records and Legacy Recordings, the catalog division of Sony Music Entertainment. Pre-save the album here.

About The Coda Collection
Launched in early 2021, The Coda Collection is available exclusively via Amazon Prime Video Channels. The unique, subscription streaming offering features an exclusive, curated selection of the most iconic music documentaries, concert films, and episodic series spanning decades and genres. Alongside the channel, The Coda Collection also hosts a complementary website exploring new perspectives on music as well as its recently released Coda Companion, a first-of-its-kind second screen experience that unites concert films on the channel with the untold or rarely heard stories that surround and enrich those films.

The Coda Collection offers hundreds of hours of exclusive concert and documentary content from artists ranging from such legendary icons as Jimi Hendrix, The Rolling Stones, AC/DC and Pearl Jam to contemporary premieres of new material by such diverse artists as The Cure, Evanescence, Coldplay, Jane’s Addiction, The Black Crowes, the critically acclaimed Dave Grohl-directed documentary What Drives Us, and Nigel Godrich’s seminal “From The Basement” performance series featuring such artists as the White Stripes, Red Hot Chili Peppers, Radiohead and others.

With her 1971 solo album, Tapestry, King achieved renown as a singer/songwriter and earned four Grammy Awards®—Record, Song, and Album of The Year as well as Best Pop Vocal Performance. Tapestry has sold over 30 million copies worldwide.

In addition to her musical career, King, who moved to Idaho in 1977, has been working for 32 years with scientists, environmental advocates, and organizations in the Northern Rockies to preserve wilderness and biodiversity in that ecosystem. For nearly 40 years her nearest neighbor was an unlogged national forest. She brought that lived experience to Capitol Hill and worked with members of Congress in both parties to educate the public about the urgent need to protect species and habitat through the Northern Rockies Ecosystem Protection Act. She has testified at four House hearings: in 1994, 2007, 2009 and most recently in 2022.

About Lou Adler
Lou Adler produced the music and guided the careers of Jan and Dean, Johnny Rivers, The Mamas and The Papas, Spirit, and Carole King, as well as the comedy of Cheech and Chong, including The Mamas and Papas’ “California Dreamin’,” Scott McKenzie’s “San Francisco (Wear Some Flowers In Your Hair),” Barry McGuire’s “Eve of Destruction,” Sam Cooke’s “(What a) Wonderful World,” and the ground-breaking multi-platinum, multi-GRAMMY Award winning Carole King’s Tapestry album.

As a multiple Grammy winner, he has produced some of the biggest selling albums of all time; he has produced 33 Top 10 singles and co-written three Top 10 songs: “Honolulu Lulu,” “Poor Side of Town,” and “(What A) Wonderful World.”

He has produced for both the stage and motion pictures. Stage productions include The Rocky Horror Show, Zoot Suit, and Bouncers. His film credits as producer include: Monterey Pop and The Rocky Horror Picture Show. In addition, he directed and produced Cheech and Chong’s Up In Smoke.

Believing in giving back to the community, he has produced all-star celebrity events benefiting children with chronic or life-threatening illnesses for the Painted Turtle Camp (which he co-founded with his wife, Page) and Paul Newman.

About Abramorama
Abramorama is the preeminent global media distribution and marketing company for nonfiction and music films. An innovator in the focused, personalized form of film distribution, marketing, promotion, and live and event cinema, Abramorama provides customized services to filmmakers, networks, digital services, and IP owners, across all platforms and in all territories. In its over 25 years of operation, Abramorama has been the trusted film partner to many of the most respected global brands in entertainment, including The Beatles, Dolly Parton, Metallica, Pearl Jam, Stevie Nicks, Neil Young, Laurie Anderson, Jimi Hendrix, Green Day, National Geographic, Discovery, AARP, MSNBC, Apple, Amazon, Netflix, HBO, Showtime, Hulu, Universal Music Group, Atlantic Records, Warner Music Group, Sony, Concord Music Group, and many others. Through a powerful global network of cinemas, digital media outlets, and affinity marketing partners, Abramorama strategically implements a unified distribution and audience activation plan for each title. Abramorama is expert at maximizing reach, engagement, marketing spends, and the ROI for content created for target audiences. For more information, visit abramorama.com.