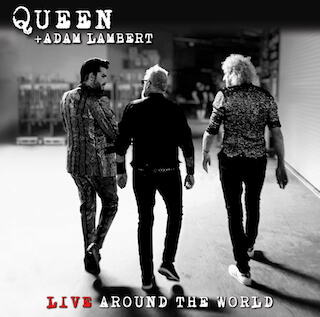 Click Above To Pre-Order Today!Queen + Adam Lambert - 'Live Around The World'

Queen + Adam Lambert has announced the release of their ‘Live Around The World’ CD/Download set for release worldwide on October 2nd in CD, CD+DVD, CD+Blu-ray & Vinyl formats

The set presents a compilation of concert highlights captured the world over personally selected by Roger Taylor, Brian May and Adam Lambert from over 200 shows they have performed with several featured here becoming available for the very first time. These cover concerts from Rock in Rio, Lisbon, to the UK’s Isle of Wight Festival, Summer Sonic, Japan, selected UK and North America tour dates, and - from one of their very last performances before lockdown –the Fire Fight Australia benefit show. All formats include the band’s entire 22-minute Fire Fight Australia appearance in which they performed Queen’s original history-making 1985 Live Aid set in full: Bohemian Rhapsody, Radio Ga Ga, Hammer To Fall, Crazy Little Thing Called Love, We Will Rock You and We Are The Champions. While even Freddie Mercury’s iconic Ay-Ohs feature.

The twenty tracks featured include firm Queen fan favourites like ‘Don’t Stop Me Now’ and ‘I Want To Break Free’ as well as rarities such as their versions of the Freddie Mercury penned “Love Kills” and “I Was Born To Love You”. The live album comes in CD, CD+DVD, CD+Blu-ray and Vinyl versions, with the DVD and Blu-ray featuring extra performance footage which include a Roger Taylor ‘Drum Battle’ with drummer son Rufus Taylor, and Brian May ‘Last Horizon’ guitar solo.

Queen + Adam Lambert’s only previously released track, their lockdown version of “You Are the Champions,” all the proceeds going towards the Covid-19 Solidarity Response Fund for The World Health Organization, was viewed close to 4 million times in its first month on YouTube.

Queen + Adam Lambert’s postponed 27-date UK and European Rhapsody Tour is now rescheduled to begin 23 May, 2021 in Bologna, Italy with its final date to be played in Madrid, Spain on 7 July. The full set of dates includes a 10-day residency at London’s The O2 Arena in June.