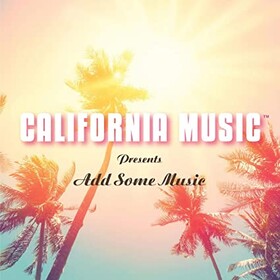 Summer time is just around the corner and, for Boomerocity, that means warm weather MUST be accompanied by Beach Boys music. Everybody loves the Beach Boys and I’m certain that everyone would agree that they’re music was both groundbreaking and timeless, still standing on its on for almost sixty years (when Surfin’ Safari was released in 1962).

A case in point is this line from 1970: “The world could come together as one” that comes from the 1970 Beach Boys composition “Add Some Music to Your Day,” and they are the inspiration for a new Omnivore Recordings album, “California Music Presents Add Some Music”, just released on CD and Digital. Initiated by Beach Boys historian and documentarian David Beard, California Music Presents Add Some Music is an uplifting collection celebrating all that is good about one of California’s greatest exports … music!

Filling out the ten tracks are recordings by Love, Jardine, Johnston, Marks longtime Beach Boys associate Jeffrey Foskett, Bonfiglio, and a previously unreleased recording of The Beach Boys’ classic ‘Friends” from the next generation. A portion of the proceeds of this release will be donated to http://www.feedingamerica.org.

From Beard’s liner notes: “Gathering together these incredible talents in order to help those in need is as good as it gets, and when it comes to the music of The Beach Boys, it makes sense. We get to listen to music while helping others. It’s ventures like this one that make the future a little brighter.”

Quotes from The Beach Boys:

“‘Add Some Music to Your Day’ brings to mind almost a decade ago when, Brian, Alan, Bruce, David and I gathered around the piano during the 50th Reunion Tour. It’s a real joy to listen to this new incarnation of the song recorded with so many family members. The hope expressed in the lyric of the song is that music can bring people together. The world in harmony — something that is desperately needed. It’s a sweet song with an uplifting message. A special thanks to David Beard for all his work in getting us all together for this sweet song with a purpose. Peace and Love.”
—Mike Love

“It’s been a great pleasure to be involved in this new version of ‘Add Some Music to Your Day,’ something we should ALWAYS be doing and having the proceeds go to the charity Feeding America to help feed the hungry is something I truly believe in. Thank you, David Beard, and everyone involved!” —Al Jardine

“I’ve always loved ‘Add Some Music to Your Day’ as a wonderful sweet song to have originally recorded and I’m honored to be part of this new ‘next century’ recording. I also think that the additional vocals from our close family and friends sounds great! Best of all: Musically we all are part of helping to benefit Feeding America.” —Bruce Johnston

“I am honored to be part of this worthwhile project, especially with the other Beach Boys! Thanks to David Beard” —David Marks