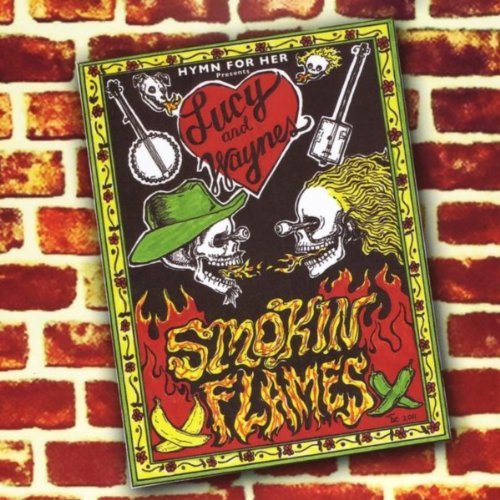 Lucy Tight and Wayne Waxing of Hymn for Her have been busy touring across the country and abroad over the past few years, injecting juiced-up backwoods country blues with a dose of desert rock psychedelia that has been described as “Hell’s Angels meets the Amish.”

How’s that for a description?

They recorded their last album, Hymn for Her Presents . . . Lucy and Wayne and the Amairican Stream, in their vintage 1961 Bambi Airstream trailer at locations stretching from Philadelphia to Malibu on a three-month tour.

For their new release, Hymn for Her Presents . . . Lucy and Wayne’s Smokin Flames,due out April 23rd, the twosome wanted to kick it into high gear. They traveled to Detroit to work with Jim Diamond, who mixed The Amairican Stream. In his Ghetto Recorders studio, the former White Stripes producer helped evolve their “stompgrass” sound to something even more heavy and rockin’.

Arriving at Diamond’s studio with road-tested tunes, Hymn for Her recorded live and mixed 12 original songs in just one week. “People wanted what they heard live at shows and we captured that moment and corked it,” explained Lucy.

Impressively, the two create their “ripsaw sounds” (Los Angeles Times’ Randy Lewis) with only a few instruments. Wayne (with the devilish voice), mainly playing the kick-drum, high-hat, acoustic guitar and harp, serves as the group’s rhythmic driving force. Lucy (of the fallen-angel voice) delivers a gritty squall on her “Lowebow” — a custom-made cigar-box guitar that she describes as “The Riff Monster.” In “Trash the Sun” Lucy launches a solo into the stratosphere, while she kicks up a sonic dust storm on “Mojave.”

“Mojave” stands among several Smokin Flames songs that were inspired by Lucy and Wayne’s desert night highway hallucinations. Rosa Parks Blvd., a revved-up punk-abilly number, comes from their squatter days in Detroit. Landescape, an ode to nomads, suggests finding a place to cherish and hold in one’s heart during life’s hard travels.

After reading a plaque at Big Sur’s Pfeiffer Beach about a young girl, her mother and grandmother who all drowned together, Lucy was inspired to write the deeply felt Ivy Pacheko. She revealed that H4H weren’t planning on including this tune on Smokin Flames; however, just before the recording sessions began, she got an email reply from Ivy’s brother (nearly a year after emailing him). He thanked her for writing the song. Lucy saw this as a sign the song needed to be on the album.

Ivy, along with tracks like For the Dead and Dark Deeds, takes listeners down a rather macabre path. The demonic-sounding Lucy Fur continues down this blood-stained dirt road with its story about “the daughter of Lucifer,” but actually reveals the duo’s devilish sense of humor. The tune, according to Wayne, is about their beloved six-year-old spawn, “99% angel, 1% baby of Beelzebub”.

Although Hymn for Her hails from Philadelphia, Lucy characterizes H4H as “a band born on Route 66.” With their daughter Diver, Manny the nanny and Pokey, their spirit guardian dog, this little self-contained unit enjoys life’s unknown adventures on the highway. They recently had a successful U.K/European tour and plan to return soon.

If you like innovative, experimental, out-of-the-box, foot stompin’ music, then Smokin’ Flames is a CD you must add to your listening library today.

Hymn For Her, Smokin' Flames