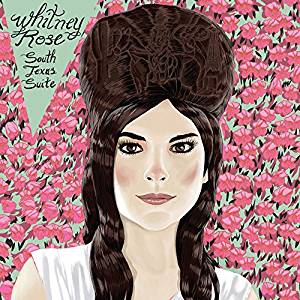 South Texas Suite is a meticulous study of sound and place, but also a product of unexpected circumstance. Last October, shortly after the release of her album Heartbreaker of the Year, Rose packed up her boot collection and headed south to play a two-month residency at Austin’s famed Americana bastion, the Continental Club. But that November-December engagement went so well, she wound up staying. Since then, she’s toured with Sam Outlaw, made her European debut and signed with Thirty Tigers-distributed Six Shooter Records.

Rose became smitten with Texas, and the warm welcome from Austin’s vibrant musical community made her feel right at home. Songs started pouring out — so many that she just had to start recording. The first result is this new EP, South Texas Suite. Rose herself produced the EP, a first for the poised countrypolitan songwriter. Top to bottom, the EP is the work of an artist who is both an insider and an outsider, an observer and a maker, a listener and a storyteller — no matter where she lives.

“Ever since I moved here I’ve been going out and watching live music, and falling in love with musicians around town,” says Rose. “The music scene here is unlike anything I’ve ever experienced before. So I have been writing nonstop, I’ve written close to 40 new songs since I arrived.”

The sensuous waltz of the opening song, “Three Minute Love Affair,” with its Tex-Mex flavor provided by Guerra’s Flaco Jiménez-worthy accordion, beautifully sets the tone for South Texas Suite  “I love the dance culture in Texas; I’m completely enamored,” says Rose. “That’s absolutely what inspired ‘Three Minute Love Affair’ — as a song starts, the world kind of stops and you’re like lovers for three minutes, and then it’s over and you’re strangers again. But there’s this beautiful little moment in time.”

Of course, no self-respecting two-stepper would take to a dance-hall floor without Rose’s favorite footwear; her heel-stomping honky-tonk ode to that Texas wardrobe essential, “My Boots,” is also a feminist statemen

“I’ll go if I can wear my boots/I don’t feel like high heel shoes/And that don’t mean that I’m crazy/That don’t mean I ain’t a lady,” she sings in her sugary-smooth voice. She sounds even sweeter on “Lookin’ Back on Luckenbach,” a wistful mid-tempo ballad about leaving a beloved place behind.

Rose didn’t write “Analog” or “Bluebonnets for My Baby,” but the “sultry country classicist,” as The New York Times called her, certainly identifies with both songs. In “Analog,” by Brennan Leigh, Rose sings the praises of lazy rivers and “that needle skipping on my old hi-fi,” as opposed to the soul-sucking conveniences of modern, digital life. And in “Bluebonnets for My Baby,” by Teri Joyce, Rose could almost be Shelley Fabares singing “Johnny Angel” to one of her ’60s-flick leading men.

“‘Bluebonnets for My Baby’ is everything that I love about music in a song. And it’s the state flower,” she observes. “I wanted this EP to be a little love letter or thank-you note to Texas, so I chose the songs that I perceived to be the most ‘Texas.’ And I love to cover songs written by women.” (It’s also no coincidence that both of the songwriters Rose has chosen hail from Austin.)

The Bakersfield-style instrumental closer, “How ’Bout a Hand for the Band,” originally was the outro for “My Boots.”

“I had amazing musicians, so I wanted the end of ‘My Boots’ to be a big jam,” says Rose. “But the song ended up being really long, so we had to cut that. But it’s such incredible playing, I didn’t want to rob the world of getting to hear it. It was a cool way to tie it up.”

Lauding Rose’s blend of “the purer sides of pop and country” in its Heartbreaker review, American Songwriter magazine noted, “The most exciting part is seeing where she goes next.”

Her immediate plans include more songwriting and work with Raul Malo, who produced Heartbreaker of the Year and will helm her next full-length; they’ll record in January at Nashville’s Blackbird Studio. Then she’ll head on tour for several months with dates in North America, Europe and Scandinavia. After that, it’ll be time to release the new album.

But until then, there’s South Texas Suite, a compelling tribute to the Lone Star State.

Ian Anderson Exhibits The Zealot Gene
91 views
Posted January 2022 Click Above To Order Your CopyI’ve said it before and I hope to say it a lot mo...