Spirits of the Western Sky 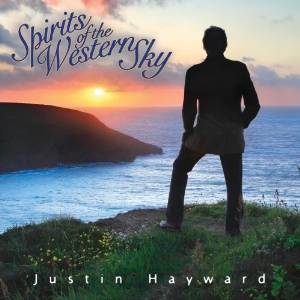 As a teen in the seventies, The Moody Blues definitely played a major part of the soundtrack of those days. The person behind the songs and the sound of all the iconic hits from that band is Justin Hayward, the band’s lead guitarist and vocalist. Hayward is one of the most prolific singer-songwriters in music. Justin’s songs include Nights In White Satin, Tuesday Afternoon, Question, The Voice, Your Wildest Dreams, and I Know You’re Out There Somewhere, to name just a few of his worldwide hits. Performing and recording for more than 40 years with The Moody Blues, during which the group has sold more than 60 million albums, Justin Hayward has been a driving force in the band’s success.

Spirits Of The Western Sky, recorded in Genoa, Italy, and Nashville, is Hayward’s first solo album since 1996’s The View From The Hill. It features his trademark vocals and guitar work on tracks such as One Day, Someday, On The Road To Love, & album opener In Your Blue Eyes, and also highlights orchestrations by Academy Award-winning composer Anne Dudley. All three of these tunes are Boomerocity favorites, by the way. Additionally, Hayward moves into new areas with the three country and bluegrass-influenced tracks What You Resist Persists, Broken Dream, and It’s Cold Outside Of Your Heart. Boomerocity loves, loves, loves these tunes, too!

“Anne [Dudley] is one of the true greats,” states Justin, “in the same rarefied class of orchestrators as Peter Knight, who was such an inspiration in my early Moody Blues days. I’ve worked with Anne on different projects over the years and it’s always a joy (when she is arranging, all the studio musicians know it’s going to be wonderful). I also co-wrote a song with my friend Kenny Loggins for Spirits Of The Western Sky. He and I were both on the road and staying in the same hotel. We had a great day playing guitar together and we came up with On The Road To Love. Kenny plays and sings on the track with me. This album is a labor of love. It’s been my whole life for the last few years. I know we all have many choices nowadays and I thank everyone who gives my album a listen and brings these songs into their collection. Every track is truly from my heart”.

Spirits Of The Western Sky is an album guaranteed to delight both Justin Hayward’sand The Moody Blues’legions of fans around the world making it a must-have album for both legions.

Chuck Leavell Interview 2011
Pam Tillis Is Looking For A Feeling